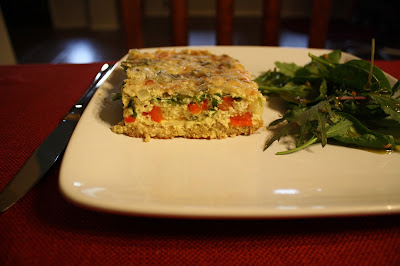 I came across this recipe for an individual serving of quinoa egg bake, which is basically a frittata made in a ramequin with quinoa, red bell pepper and onion. The original recipe, however, was from Whole Foods, and had spinach and cheese instead of the red bell pepper and onion. After seeing both recipes, I felt that either one alone was lacking something. I decided to combine the best of both worlds and make my own, with all the fixings. The quinoa settles to the bottom of the dish and creates a sort of crust, yet I really think of this more as a frittata than a quiche, so that’s the name I’m going with. The recipe below is mine, adapted from the two links above. The only thing I might do differently next time is include some of the cheese in the egg mix instead of only topping the frittata with it. I really liked this, and served it with a salad that was a mix of baby kale, baby chard and baby spinach, along with crack sauce.

In a large bowl, whisk eggs, milk, garlic, thyme, salt, pepper and quinoa. Stir in onion, bell pepper and spinach (and extra parmesan cheese if you want), then pour mixture into prepared dish. Cover tightly with foil, then jiggle dish gently from side to side so that quinoa settles on the bottom in an even layer. Bake until just set, about 50 to 55 minutes. Remove foil and sprinkle top evenly with cheese. Return to oven and bake, uncovered, until golden brown and crisp, 10 to 15 minutes more. Set aside to cool briefly, then slice and serve. 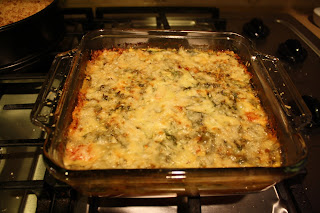 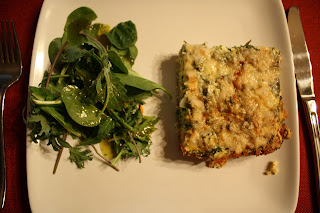 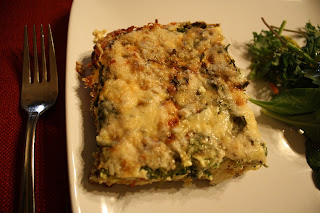