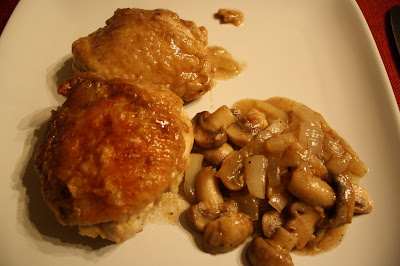 This recipe is from Maya Angleou’s Hallelujah! The Welcome Table, which has as many good stories as it does recipes. The first time I made it, I was living in Montreal and Dear Sister was staying with me for a while. We both enjoyed this dish very much on a summer evening, then we stepped out to run a few errands (I believe this included a trip to the hardware store, but for the life of me I can’t remember what exactly we needed). The point is that when we came back home, as we were walking in the hallway of the building, we smelled this fabulous chicken dish and said out loud, “Wow, somebody’s eating well tonight!” And when we opened the door to our apartment, we realized the smell was coming from our own kitchen! The thing with many cooking smells is that when you’re in the kitchen, you’re like a frog in boiling water and don’t realize just how good things start to smell, but someone walking in will notice it. (This time, I noticed it after stepping out of the shower a few hours after dinner; it’s really heavenly.)

The recipe below is the halved version of the one in the book, and is enough to serve 4, though it could be stretched to 6 servings with a side. Maya Angelou recommends serving this with biscuits, but I think mashed potatoes would be wonderful here, too. The chicken this time didn’t come out with a sauce as creamy as the one I remembered from the first time. In my recollection, this dish had been so creamy the first time that I actually thought there was cream in the ingredients, and was surprised to find out this wasn’t the case as I was looking at the recipe again when making my weekly menu. I’m not sure what I did differently this time; I did halve the recipe, sure, but I can’t imagine that I made 8 servings of it for 2 people the first time, either… Anyway, the sauce was more liquid than creamy, but it was delicious, and I do picture it spooned over mashed potatoes. I caved and ate some of the crispy chicken skin (since it turns out it’s not that bad for you) and I loved the dish. The Engineer said it was awesome chicken.

Wash and pat dry chicken. Cut into pieces, and put in a bowl with lemon juice and water to cover. Refrigerate for 1 hour.

Wash lemon water off chicken, and season with salt and pepper. Dredge pieces of chicken in 6 Tbsp. flour (pardon the measurement, which seems a little odd only because I’ve halved the recipe).

In a large skillet (I used my Dutch oven and did this in 2 batches), fry chicken parts on high heat in 2 Tbsp. oil (or more, really, because the bottom of the skillet should be oiled) until dark brown. Remove from skillet.

Add remaining flour (2 Tbsp.) and oil (2 Tbsp. as well) to skillet. Cook flour until brown. Add onions, mushrooms, and garlic, stirring constantly. Put chicken back into skillet. Add chicken broth and water to cover (I only added broth). Turn heat to medium, and cook for 25 minutes (I used a thermometer to make sure the chicken was cooked through).
Posted by Amélie at 5:46 PM