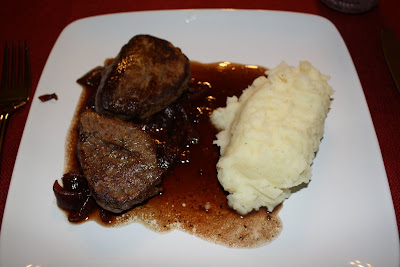 This is the first recipe I made from Gluten-Free Girl and the Chef, which Dear Sister gave me for my birthday. It’s a book containing a love story and recipes that go along with it. They are gluten-free, but that’s not even the first thing you notice. I actually read the book cover to cover, and the recipes just fit in the narrative perfectly. I also love the tone of the book, how the authors don’t just give directions, but explain things clearly, giving you both a lot of details and a lot of variations to account for things like food sensitivities, the way your oven might be a little different from theirs, the tools you have in your kitchen, etc. There are a lot of recipes I want to try in the book, but I started with this one.

This meal was so good that we were hunched over our plates, moaning and hardly saying anything as we ate. The meat was so perfect that I could hardly believe it came from my stovetop. Sure, it’s somewhat of an expensive cut, but it’s well worth it. The Engineer, who normally doesn’t even like steak, said it was “yummy”. A few minutes later, he corrected himself: “Did I say ‘yummy”? I meant outstanding.” He said it was the best beef he’d ever had! The trick is not to overcook it. That being said, you have to reduce the port sauce for a while, and I know that I take a longer time than most to reduce sauces, so I put the beef in a low oven to keep it warm – take that into consideration as you’re pan-searing it. I don’t like my meat rare, though, so I did slice the medallions in two lengthwise to make sure they cooked evenly; this depends on your preferences, and the serving size depends on your appetite (here, the official yield is 4 servings).

I served this with mashed potatoes. The book does have a recipe for a potato purée that looks delicious, but it calls for a food mill or ricer (neither one of which I have), or you can rice the potatoes through a sieve (but I didn’t think my sieve could handle that); there was also a lot of dairy, so I would have needed to substitute some ingredients. I hope I’ll get around to adapting it, though! I also think that I’ll make the balsamic onions again to serve them with other things – I swooned when I first tasted them, they were that good!

Port Reduction Sauce
1 cup port
2 cups veal stock (I used store-bought beef bouillon, so not GF, but the book has a recipe)
kosher salt and cracked black pepper
2 Tbsp butter (or vegan margarine if you’re too sensitive to butter)

For the Balsamic Onions
Set a large sauté pan over high heat. Pour in the olive oil. When the oil starts to smoke, add the onions. Cook, stirring occasionally, until the onions have wilted and shrink, have turned dark blue or purple in color, and smell sweet, 7 to 8 minutes. Add the brown sugar to the pan and cook, stirring, until the sugar begins to melt into the onions.

Pour the vinegar into the pan and cook, stirring occasionally and tasting continually, until the liquid is reduced and thickened, but not burnt, about 7 minutes; if you reduce it too much, it becomes tarry with a burnt taste, and instead you want a strong balsamic flavour, followed by the sweetness of the onions. Season with salt and pepper, if necessary. Set aside. 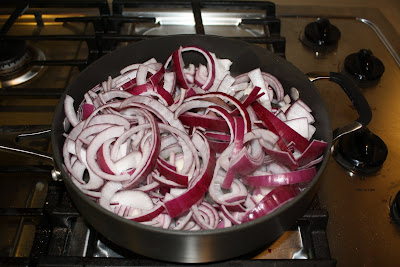 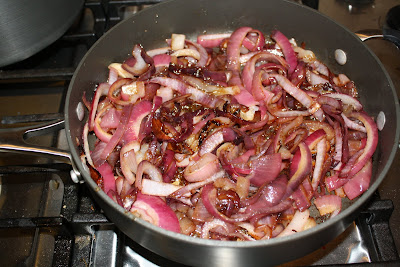 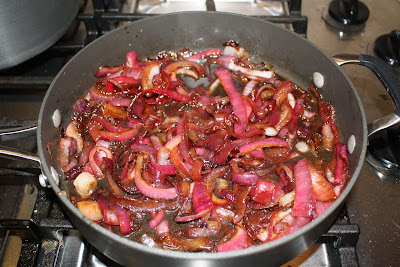 For the Beef Tenderloin
Season the tenderloin medallions with salt and pepper. Set 2 large sauté pans over high heat. Pour the canola oil into the hot pans. Put the tenderloin pieces in the hot oil; don’t crowd the pans, or the beef will boil in the oil, and that wastes a good piece of beef. Cook until the bottom of each piece has a lovely brown crust, 2 to 3 minutes. Flip over the tenderloin pieces. For medium-rare doneness, the medallions should have a little firm push at the center when pressed, but with softness all around, and the internal temperature should be 150 °F. (Personally, I used the finger test to get medium doneness.). Remove the pans from the heat, transfer beef to a plate, and allow the beef to rest while you prepare the sauce.

For the Port Sauce
Pour ½ cup of the port into each pan, scraping the goodness from the bottom. When you have deglazed both pans, pour the contents of one pan into the other. Set the pan with the port over medium heat and simmer until the port is reduced by half its volume.

Scoop the balsamic onions into the reduced port. Pour in the veal stock. Simmer until the liquid is reduced by half its volume. Taste the sauce and season with salt and pepper, if necessary. Drop in the butter and whisk the sauce until the butter is fully incorporated.

To serve, spoon the sauce with the onions onto each plate. Place 2 tenderloin pieces on top of each serving. 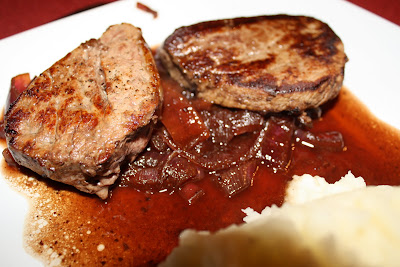