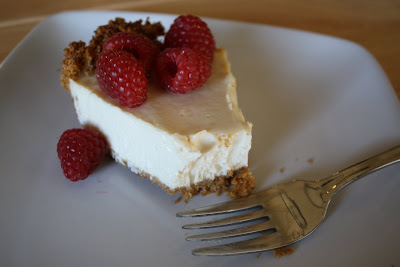 I used to love cheesecake. I baked plain cheesecakes, some with classical pairings like strawberry, raspberry or chocolate, and I enjoyed more unusual flavours like pumpkin-ginger or apple-thyme. Unfortunately, I can’t really have them anymore, as I find it very hard to dose Lactaid properly. Almost two years ago, I found this recipe for a vegan cheesecake. I was elated, until I realized that it called for a package of Tofutti’s Better Than Cream Cheese. It’s not that we don’t have this in Canada, but certainly not in the grocery stores near our place. Now, however, it is readily available to me. And if I ever move someplace where it isn’t, I’ll beg the grocery store to start carrying it (as I’m doing now for Damafro’s Elite lactose-free goat cheese, which I sorely miss).

So I finally got to make this recipe. It calls for a premade vegan crust, but I used a recipe I already had for a graham cracker crust, which I think is great with cheesecake. Keep in mind that graham crackers usually contain honey, so they are not vegan. You can make your own, though, and you can even make them gluten-free. Of course, you could use the crust of your choice. I used a 9-inch pie plate, but a springform pan would have been more appropriate (a tart pan might be too shallow).

The first time I tasted the cheesecake (after it had spent several hours in the fridge), I could taste the soy – though this was less apparent the second day – but it was very good. It was creamy and had the right consistency. I decided it would be a great base to recreate those flavoured cakes I used to make. The next day, it was even better, and it was hard to stop after only one piece. It graduated from “very good” to “fantastic”. The Engineer doesn’t usually like cheesecake, but even he loved this one, so it’s better than cheesecake!

Out of curiosity, I wanted to use a recipe analyzer to compare the calorie count and fat content to that of a typical cheesecake of the same size; unfortunately, I couldn’t find the Tofutti as an ingredient. If anyone knows of a better recipe analyzer, please share! 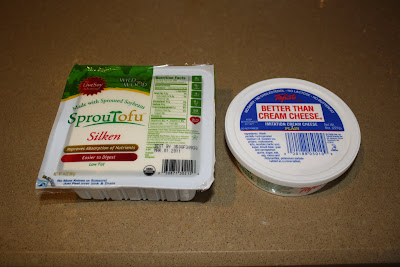 For the crust
Preheat the oven at 350 °F. Mix the ingredients and press into a 9-inch springform pan, covering the bottom and the sides. Bake for 10 minutes.

For the cake
Preheat oven to 350 °F (if you haven’t done so already for the crust).

Place silken tofu and vegan cream cheese in the food processor. Process for 1 minute, then add sugar. Process until smooth and no sugar granules remain, 3-5 minutes.

In a small bowl, combine lemon juice and almond extract. Whisk in cornstarch. Pour mixture into the food processor and process until very smooth. Pour into prepared crust and bake for 45 minutes.

Allow to cool at room temperature for 2 hours, then refrigerate at least several hours (ideally overnight). 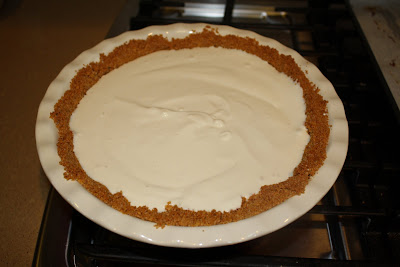 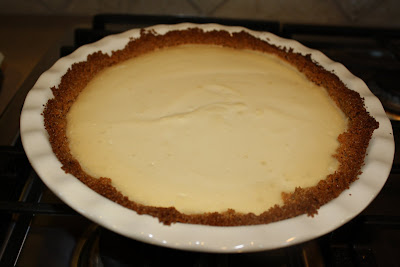 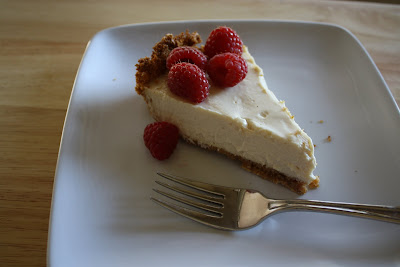