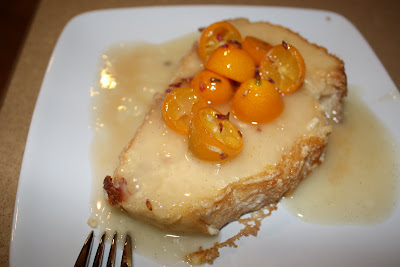 This is the third recipe I try from Love, Eric, the vegan macrobiotic dessert cookbook I got last year (I also tried the Satsuma tangerine chiffon cakes and the Meyer lemon tart. This pain perdu – or French toast – is great both for dessert or breakfast. I had more kumquats than the recipe called for, so I increased the amount of syrup with which they are roasted, but they were still too bitter for our taste. The lavender, however, was genius. I also used rice milk instead of soy milk, since that’s what I had left over from the Meyer lemon tart, and I used half a vanilla bean instead of only a quarter. The consistency of the sauce was perfect. One of the problems with this book, though, is that the proofreading was done too quickly; sometimes, the list of ingredients mentions rice syrup, but the directions then call for maple syrup, or the ingredients are presented in the wrong order. I’ve corrected that in the recipe I give below.

So while the kumquats were too bitter, the pain perdu with rice cream was absolutely delicious. The quality of French toast that I thought was attributable to eggs is actually present in this recipe, even though it’s vegan! The consistency was great, and I’m sure you could use berries instead of the kumquats. It’s more of a hassle than regular French toast, but if you’re looking for a vegan alternative, this is fantastic!

For the Lavender Roasted Kumquats
Preheat the oven to 350 °F.

Add 2 Tbsp of water to a small oven-proof dish. Combine the kumquats, rice syrup and lavender flowers in the dish. Bake for about 15 minutes, basting occasionally with the liquid. Set aside. 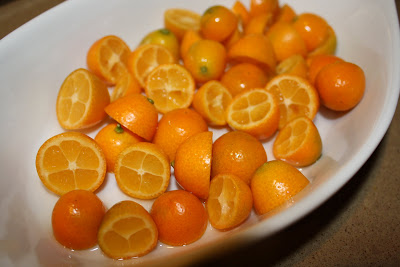 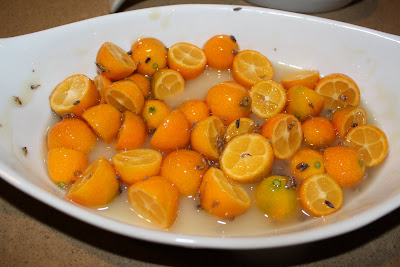 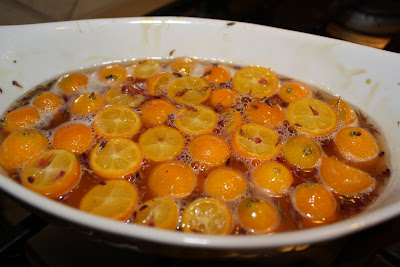 For the Soy Vanilla Cream
Combine the vanilla bean and soy milk in a saucepan and simmer for 5 minutes. With a slotted spoon, remove the vanilla bean. Scrape the seeds from the bean and pour the seeds back into the soy milk, along with the rice syrup and sea salt.

Dissolve the kuzu with 1 Tbsp of water and whisk into the soy milk mixture. Cook over a low flame for 1 minute (do not boil).

Transfer the mixture to a container and refrigerate.

For the Pain Perdu
Combine the tofu, maple syrup and soy milk in a blender and process until smooth. Add the remaining ingredients and blend for a few more minutes. Transfer to a large bowl.

Soak the slices of sourdough bread in the mixture for a few minutes.

Bring a sauté pan to medium heat and oil the bottom.

Remove any excess mixture from the bread slices and cook until golden brown, about 1 minute on each side. 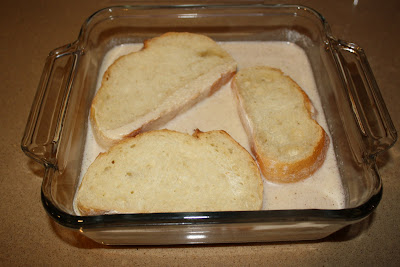 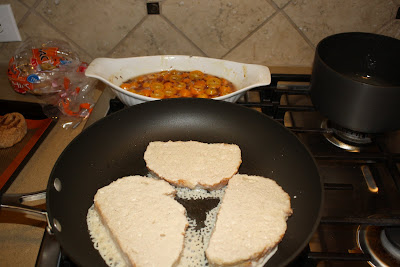 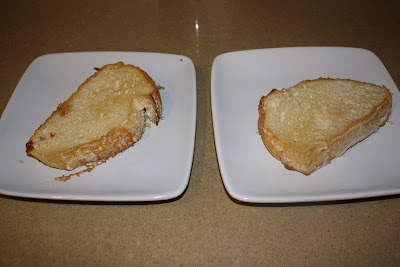 To serve
Place each slice of Pain Perdu on a plate and top with the Lavender Roasted Kumquat and its cooking juices. Pour the soy vanilla cream over the Kumquat as desired and sprinkle with lavender flowers. (I pour the cream on first, then topped with kumquats, because that’s what was done in the pictures in the book.) 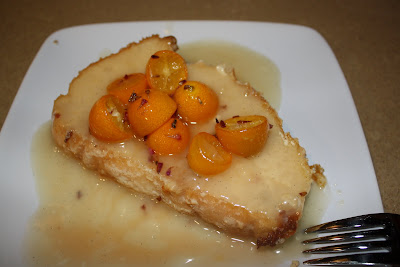