Even though I cook and bake a lot, I had never made anything specifically for our dog, Darwin. His first birthday was earlier this month, so I decided to make him treats that day. I stuck to a roundup of treats posted on The Kitchn. My criteria were that the recipe had to make a reasonable number of treats (i.e., up to two dozen, as opposed to six dozen) and that the ingredients must currently be in my pantry (it was bursting at the seams, and buying yet another kind of flour was out of the question). So I adapted the cinnamon bun bites, without the icing – you should know that adult dogs are usually lactose-intolerant, so feeding them cream cheese is probably not a good idea.

They looked so good that the Engineer actually tried one, without knowing it was meant for Darwin. The ingredients are all things that I would eat, so I knew there was nothing disgusting about it! I expected him to say something along the lines of “Sweetie, I think you forgot the sugar”, but no, his first thought was that they were a little dry (Darwin sure didn’t seem to mind). I couldn’t look at him without bursting into laughter, so I confessed. I then tasted them myself for good measure. Darwin got the first one as a freebie, but I did make him work for the rest (spread out over several days, of course).

In a large bowl, combine flour, baking powder and salt. In a small bowl stir together water, oil and egg. Add to the dry ingredients and stir just until you have a soft dough.

On a lightly floured surface, roll or pat the dough into a rectangle that measures roughly 8×14 inches. Drizzle with honey and sprinkle with cinnamon. Starting from a long edge, roll up jelly-roll style and pinch the edge to seal. Using a sharp serrated knife or (even better) dental floss, slice half an inch thick and place slices cut side down on a cookie sheet covered with parchment paper. Bake for about 15 minutes, until springy to the touch.

Makes about 2 dozen biscuits. Store extra in a tightly covered container of freeze. 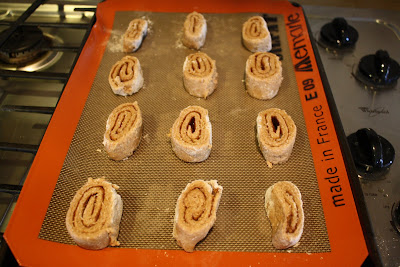 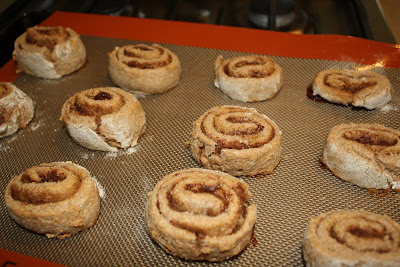 For the dog days of next summer, here are also some frozen treats you can make.
Posted by Amélie at 11:42 AM