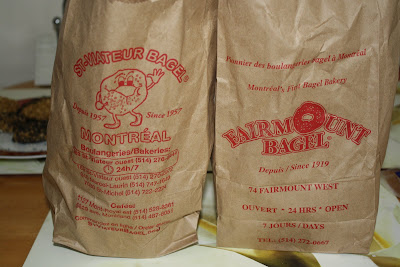 I decided that before I left Montreal, I had to make up my mind as to which institutional bagels I prefer: Saint-Viateur’s bagels or Fairmount’s bagels. So the Engineer and I had a taste test: four bagels from each place, eaten side-by-side, to see which we preferred. And it was much harder than I had thought! At Saint-Viateur, we got one poppy seed, one sesame seed, one plain and one cinnamon-raisin. At Fairmount, it was one poppy seed, one sesame seed, one garlic and one chocolate.

From what we could observe, the preparation methods of both places seem to be the same: the dough is boiled first, then baked. Fairmount, though, is somewhat more of an institution (1919 vs. 1957), AND they have the first bagel in space! (On Mission STS-124.) 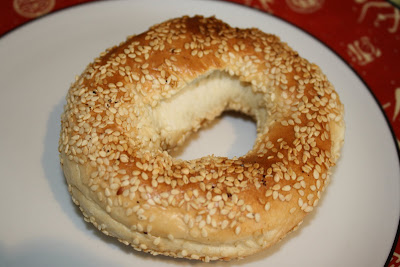 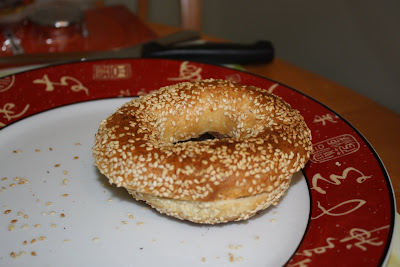 For the sesame seed bagels: the first one is from Saint-Viateur, and the second one is from Fairmount. I had a slight preference for the Saint-Viateur one, which I felt had a better texture: chewy inside and crispy outside. The Engineer said the exact same thing about the Fairmount one, though. And the more we tasted, the less sure we were that there existed a significant difference. 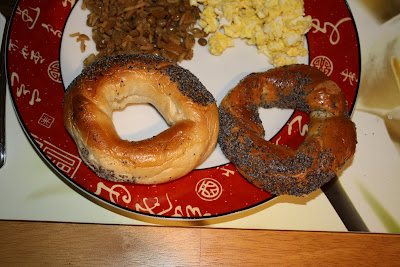 As for the other ones: I was a bit disappointed by the chocolate from Fairmount, because it was really some chocolate chips scattered in the batter, not pure chocolate – but it was good for what it was. The Engineer loved the garlic bagel, but it was a little too much for me. I felt the same about the cinnamon-raisin, which is more his taste than mine. And the plain one was...plain, but leaps and bounds better than grocery-store bagels. 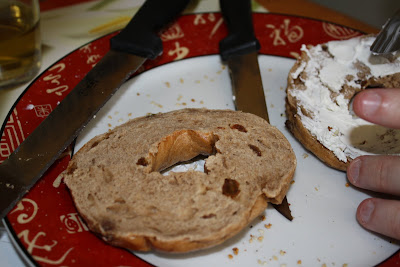 In conclusion, I have a slight preference for Fairmount (both because of the bagels themselves, but also because they offer over 20 flavours). Also, Saint-Viateur’s mascot is a little scary. That being said, we’re not exclusive clients of either place and are not part of either of the two camps of Montreal’s “bagel snobs”.
Posted by Amélie at 3:44 PM