I was making an effort to empty the freezer, so when I came across the rest of the southwestern chicken from this recipe and some frozen cooked quinoa, I knew that I had to make a bowl. It was the perfect occasion to try a cilantro dressing from Parents magazine! (It appeared in their January/February 2002 print edition, in a 7-layer grain bowl recipe, but the website is such a mess that I can’t find it.)

I added leftover Napa cabbage from the previous week’s salad, some miniature tomatoes, bell pepper, and sharp cheddar. This was great!
I adapted the recipe slightly by reducing the amount of olive oil by half, and at that point I definitely needed a stick blender instead of a regular blender. The recipe below is my version.
1 ¼ cups cilantro leaves
¼ cup olive oil
¼ cup fresh lime juice
2 Tbsp. lactose-free plain Greek yogurt
2 tsp. honey
1 tsp. kosher salt
½ tsp. minced garlic
½ tsp. black pepper
Combine ingredients in a jar and use a stick blender to blend together until smooth. Refrigerate leftovers. 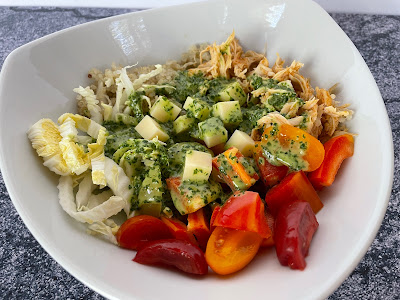