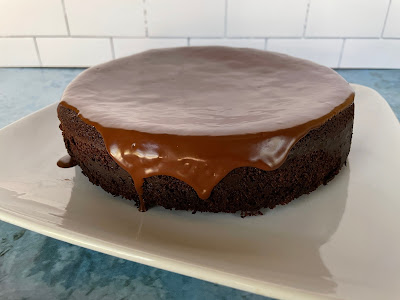 I saw this chocolate beet cake on Bon Appétit and decided to make it. I was really glad to read the comments in the original recipe, because they made my life much easier. First, instead of roasting or boiling my own beets for this, I used a 15-oz. can of sliced beets, drained them, then puréed them with an immersion blender – boom, just the right amount. Second, I used a 9” springform pan instead of an 8” pan, which would have been too small – that’s what I’m writing below. Everyone liked this cake! (The Fox doesn’t like the glaze because the chocolate is too soft, but he does like the cake itself.)
For the cake
4 medium beets, scrubbed (see note above)
2 Tbsp. virgin coconut oil, plus more for pan
½ cup Dutch-processed cocoa powder, plus more for pan
1 ½ cups almond flour
½ tsp. baking soda
½ tsp. ground cinnamon
2 oz. bittersweet chocolate, coarsely chopped
1 tsp. apple cider vinegar or distilled white vinegar
1 tsp. vanilla extract
4 large eggs
1 ¼ cups (packed) light brown sugar
1 tsp. kosher salt (I used ½ tsp. Morton kosher salt)
For the glaze
4 oz. bittersweet chocolate, coarsely chopped
1 Tbsp. virgin coconut oil
¼ tp. vanilla extract
1 pinch kosher salt
For the cake
Cook beets in a medium pot of boiling unsalted water until tender, 30–40 minutes, depending on size. Drain and rinse under cold water until cool enough to handle. Cut off stem end, then peel and cut beets into large pieces. Transfer to a blender and add 2 Tbsp. water. Blend, adding water 1 Tbsp. at a time as needed, until a smooth purée forms—it should be the consistency of applesauce. Measure out 1 cup purée (reserve remaining purée for another use, such as blending into a smoothie).
Preheat oven to 350 °F. Line bottom of a 9" round cake pan with parchment. Grease with oil, then dust with cocoa powder, tapping out excess.
Whisk almond flour, baking soda, cinnamon, and remaining ½ cup cocoa powder in a medium bowl; set aside.
Heat chocolate and remaining 2 Tbsp. oil in a medium heatproof bowl set over a saucepan of barely simmering water, stirring often, until melted. Remove bowl from heat. Stir in vinegar, vanilla, and reserved 1 cup beet purée until smooth.
Beat eggs, brown sugar, and salt in the large bowl of a stand mixer fitted with the whisk attachment on medium-high speed (or use an electric mixer and large bowl) until more than tripled in volume and mixture holds a ribbon for several seconds when beater is lifted above batter, 5–7 minutes. Thoroughly beating the eggs is key to creating an aerated, light crumb and is a critical step when using gluten-free ingredients.
Pour chocolate-beet mixture into egg mixture and beat on medium-low speed until combined. Turn mixer off and gently tip in reserved dry ingredients. Beat on lowest speed, scraping down bowl as needed, until combined.
Transfer batter to prepared pan. Bake cake until a tester inserted into the center comes out clean and the top springs back when gently pressed, 45–50 minutes. Let cool 10 minutes. Carefully run a knife around edges of pan, then invert cake onto a wire rack and let cool.
For the glaze
Heat chocolate, oil, vanilla, and salt in a medium heatproof bowl set over a saucepan of barely simmering water, stirring often, until chocolate is melted. Let cool, stirring occasionally, until mixture is thickened and cool enough to touch, 10–15 minutes. Place rack with cake on a rimmed baking sheet.
Pour glaze over center of cake to cover top, tilting baking sheet slightly to encourage a few drips to run over sides of cake. Let sit at room temperature until glaze is set, 2–3 hours. The cake can be kept at room temperature for a few days. 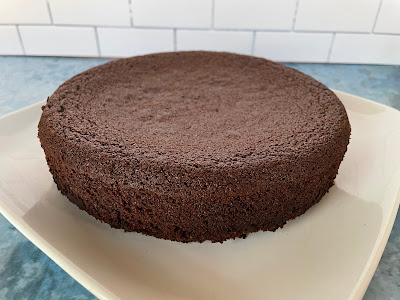 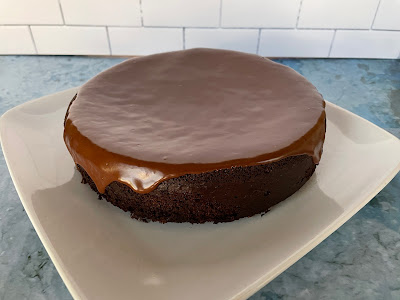 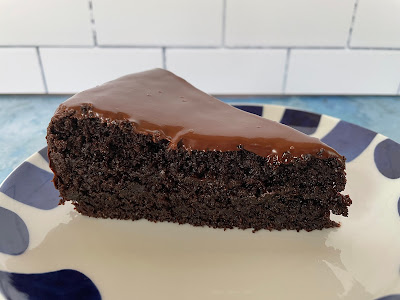 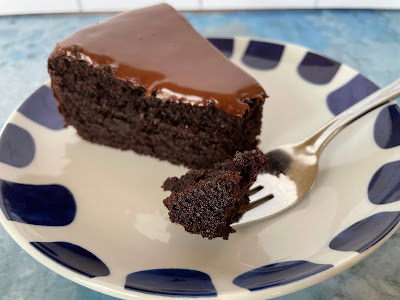