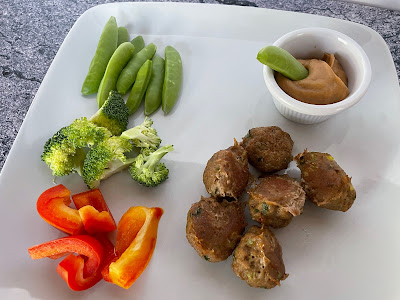 I thought that a good way to make vegetables more appetizing to my kids would be to serve them with dip. My kids don’t like ranch dressing at all, but they do like peanut butter. I decided to make this peanut dressing from Bon Appétit and serve it with vegetables for dipping, and turkey meatballs with sweet soy dipping sauce from Parents. The peanut dressing was a success!
[At the risk of making you feel like you’re drinking from a firehose with these ideas and recipes coming at you: I also strongly recommend the following sweet dipping sauce for fruit! Mix together 1 cup (175 g) of white chocolate and 1 cup of peanut butter (260 g) in a double boiler until all the chocolate has melted. Let cool before serving. The Little Prince thought it was the best thing ever; the Fox decided he didn’t like it, even though he likes both ingredients separately.]
About that sweet soy dipping sauce: it didn’t happen, because I burnt it. I mean, the phone rang a few minutes before it was done, and I had to take the call because it was important. It’s not even that the call was long, but when I hung up, I was squarely in sitting-at-my-desk-taking-notes mode, not standing-at-the-stovetop-stirring-a-pot mode, so I completely forgot the sauce even existed. Even when I smelled it burning, I thought it was weird because I clearly remembered taking the meatballs out of the oven and turning it off, so I couldn’t fathom why that smell was emanating from the kitchen at that point. Only when I went back in the kitchen to serve dinner did I see the pot of what had been dipping sauce and was now crud. Oh well! Barkeeper’s Friend to the rescue. The meatballs themselves were great, though.
For the peanut dressing
½ cup smooth peanut butter
2 Tbsp. unseasoned rice vinegar
1 Tbsp. sugar
1 tsp. reduced-sodium soy sauce
kosher salt and freshly ground black pepper, to taste
Whisk peanut butter, rice vinegar, sugar, and soy sauce in a medium bowl until smooth. Whisk in water until dressing is the consistency of heavy cream (about ¼ cup to ½ cup; I used less, because I didn’t want my kids dripping sauce everywhere); season with salt and pepper. This dressing is great with vegetables of your choice (I served broccoli, bell peppers, and sugar snap peas); it’s also a good accompaniment to dumplings and spring rolls.
For the meatballs
1 large egg, lightly beaten
½ cup dried breadcrumbs
1 lb. ground turkey
½ cup minced cilantro
¼ cup finely chopped green onion (from about 2)
2 Tbsp. reduced-sodium soy sauce
1 Tbsp. vegetable oil
1 Tbsp. toasted sesame oil
½ tsp. kosher salt
For the dipping sauce
2 slices peeled fresh ginger, or more to taste
¼ cup packed brown sugar
¼ cup reduced-sodium soy sauce
1 Tbsp. unseasoned rice vinegar
sliced green onions (optional)
Preheat the oven to 400 °F. Line a baking sheet with parchment paper.
In a large bowl, add egg, breadcrumbs, turkey, cilantro, green onion, soy sauce, vegetable oil, sesame oil, and salt. Gently mix together until combined.
Roll tablespoon-sized scoops between your palms to form meatballs and transfer to prepared baking sheet. You will have about 40. Bake until well browned, 20 to 25 minutes.
While meatballs bake, smash the ginger with the heavy side of a knife and put it in a small saucepan. Add brown sugar, soy sauce, and rice vinegar. Stir over medium-low heat until sugar dissolves and mixture is slightly thickened, about 3 minutes. Strain out ginger and transfer sauce to a bowl. Garnish with green onions, if using. Serve sauce with meatballs.
Posted by Amélie at 2:54 PM