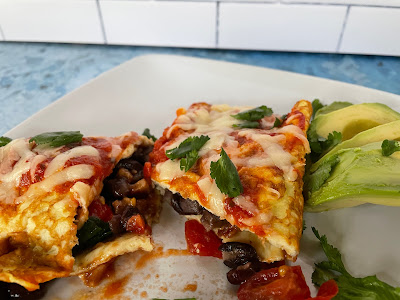 A while back, I tried making a simple chicken enchilada casserole with low-carb tortillas. I thought it was really good, albeit not photogenic at all, but the kids didn’t like it. (The Little Prince currently does not like melted cheese, unless it’s on a pizza, and I’m having trouble dealing with that.)
Then, for my own lunch, I decided to make another version of low-carb enchiladas, one with egg instead of tortillas. I adapted it a bit to what I had on hand (using marinara sauce instead of enchilada sauce, and lactose-free mozzarella instead of Monterey Jack). Honestly, the process of making the omelets felt daunting before I started, but once it was done, I realized it had been surprisingly painless and easy! I got 7 tortillas and had leftover filling and sauce, so next time I’d use an 8”x11” pan. I also think that you could omit the bacon for a vegetarian version and it would still be great.
This was absolutely delicious! I really loved eating my lunches that week. This made about 4 servings.
8 large eggs
¼ cup lactose-free milk
kosher salt
freshly ground black pepper
4 Tbsp. lactose-free butter, divided
6 slices bacon, chopped
2 cups baby spinach
1 ½ cups black beans
1 cup quartered cherry tomatoes
½ cup enchilada sauce
½ cup shredded lactose-free cheddar cheese
½ cup shredded Monterey Jack (I used lactose-free mozzarella)
cilantro, for serving
chopped avocado, for serving
pico de gallo, for serving
Preheat oven to 350 °F and grease a square baking pan (see note above) with cooking spray.
In a large bowl, whisk together eggs and milk until very frothy. Season mixture with salt and pepper.
In a small or medium nonstick pan over medium heat, melt about a ½ tablespoon of butter. Add about ¼ cup of egg mixture and swirl pan. Cover with a lid and cook for 3 to 5 minutes, until the eggs are set in the middle. Remove from heat and repeat, adding more butter as necessary. Set aside.
In a medium skillet over medium heat (I used the same pan as before), cook bacon. Remove bacon pieces from skillet and drain most of fat, leaving about 2 tablespoons of bacon fat. Add spinach, black beans, and cherry tomatoes and cook, stirring occasionally until the spinach has wilted, about 3 minutes. Season with salt and pepper.
On a cutting board, lay out one egg tortilla. Top center with spinach filling and bacon, then roll up tightly. Repeat with other tortillas and filling.
Spread a thin layer of enchilada sauce in baking pan. Add enchiladas in a single layer. Drizzle more sauce on top, then top with cheddar and Monterey Jack. Bake until cheese has melted, about 15 minutes.
Garnish with cilantro, chopped avocado, and pico de gallo. Serve warm. 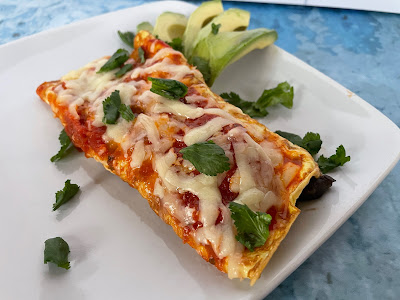 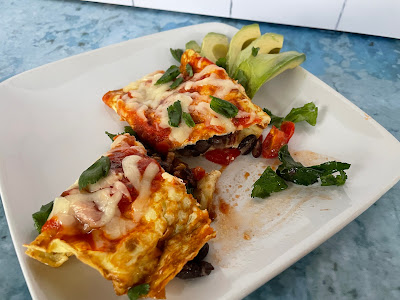