I got this recipe from an article on barbecuing in Bon Appétit. Except, well, you know me and grills, so I decided to put the pork in a 350 °F oven for 40 minutes. This was a really big hit! In the photos in the magazine, the sauce has a gorgeous yellow-orange shade, but mine turned out on the reddish side of pink. It contains ketchup, which probably explains both the shade and the fact that the Little Prince liked it so much! That being said, I’d consider making it without ketchup, and I even wonder whether the magazine used any in the first place – it’s a recipe from a restaurant called B’s Cracklin’ Barbeque in Georgia, so if anyone has been there, feel free to comment! The photo they have on their menu also has bright yellow sauce. The recipe was supposed to make 1 cup of sauce, but I got a little over 2 cups, presumably because I had big peaches.

I served the pork with broccoli slaw on the side.

Purée peaches, ketchup, mustard, brown sugar, pepper, and ½ tsp. salt in a blender until mixture is smooth and creamy. Taste sauce and season with more salt if needed.

For the pork tenderloins
2 pork tenderloins (about 1 lb. each)
4 tsp. kosher salt
1 tsp. freshly cracked black pepper
Vegetable oil, for the grill (see note above)
½ cup peach preserves (I used apricot because I already had some on hand)

Sprinkle pork with salt and pepper and rub all over. Let sit at room temperature 1 hour (yeah, I didn’t do that). Meanwhile, prepare a grill for medium heat and brush grate with oil.

Brush pork with some preserves. Grill, turning every 4 minutes or so and brushing with any remaining preserves, until charred on all sides and an instant-read thermometer inserted into the thickest part registers 130°, 10–12 minutes. Transfer to a cutting board and let rest 10 minutes. Slice ½" thick. (I put the pork in a 350 °F oven for 40 minutes and I aim closer to an internal temperature of 165 °F; I had put apricot preserves on it before putting it in the oven and I added a bit more once it was done.) 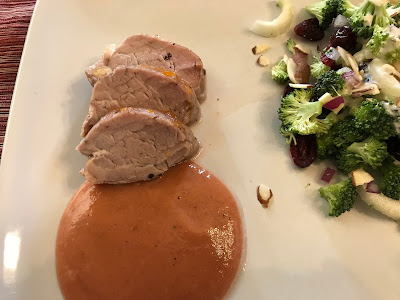