I love the idea of morning buns on the weekend, but I rarely make them, in part because they can be a lot of work and in part because I’m easily disappointed. Take these chocolate coconut almond sticky buns, which were so underwhelming that I actually threw almost half of them away. But then I tried bostock.

Bostock is essentially an almond brioche. I’ve seen versions online where day-old brioche is brushed with almond simple syrup before being baked, which would make it similar to French toast, but this version has you make brioche and spread it with almond cream (lactose-free in my version). I’ll admit I had trouble working with this dough, as it was incredibly soft, almost liquid (“a blob of dough” would be the correct term). I recommend letting it rest in the fridge overnight before working with it. I mean, the instructions did say to chill it, but without specifying a length of time, and the few hours for which I chilled it were blatantly insufficient. (To give you an idea, my actual notes from when I made it are “WTF?”) Once I got it in the pan, of course, the dough stuck together, so I ended up slicing it like cake instead of pulling it apart like buns. That being said, it was absolutely delicious!

You could also consider making another dough instead of the one below. I really enjoyed Julia Turshen’s raspberry jam buns, though it wasn’t a brioche dough, and admittedly that characteristic is important here. Maybe the dough from my chocolate babka would be a good substitution?

For the brioche
Mix the salt, yeast, eggs, honey and melted butter with the water in a large bowl. Mix in the flour without kneading; the dough will be loose but will firm up when chilled. Cover the dough with plastic wrap and allow to rest a room temperature for 2 hours, then chill in the fridge overnight before trying to work with it.

For the almond cream
Cream together the butter, almond paste, flour, egg and almond extract in a food processor (or by hand if you are brave) until smooth and set aside.

Dust the surface of the refrigerated dough with flour and quickly shape into a ball. Roll the dough out into a long rectangle (about ¼-inch thick), using enough flour to prevent it from sticking to the counter. Spread the almond cream evenly over the rectangle and roll the dough up like a jelly roll, starting at the long end. Chill the log in the freezer for about 15 minutes.

Meanwhile, grease an 8-inch round cake pan with butter and sprinkle liberally with sugar.

Cut the chilled dough into 8 equal pieces. Place them evenly in the cake pan so the swirled edge is facing upward. Allow the dough to rest in the pan for an hour; 20 minutes before baking time, preheat the oven to 350 °F.

Just before baking, combine the sugar, orange zest and almonds and sprinkle over the brioche. Bake for about 40 minutes or until golden and well set in the center.

When you remove the brioche from the oven, run a knife around the inside of the pan to release the bread from the sides and invert it onto a large plate (it could stick to the pan otherwise). Eat while warm. 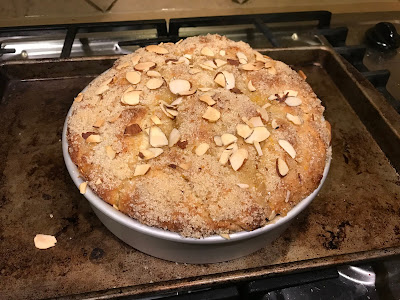 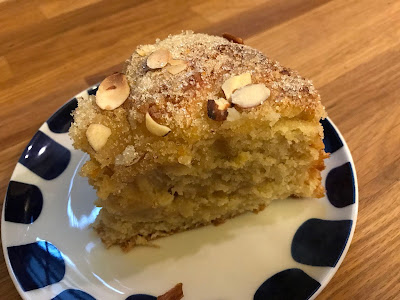