I tend to focus on pumpkin in the fall, but I don’t want to forget about apples! My friend Jen shared a recipe for apple bars from Inspiration Kitchen that I had to try. It turns out my kids liked it just as much as hers did, and we all wanted second helpings!

I didn’t feel like making a cream cheese frosting, and Jen had told me that she hadn’t bothered with it either, so this version is plain. Bonus: this means it’s totally acceptable for breakfast or an after-school snack, too! The amount of spices below are those I used instead of buying pumpkin pie spice (which I refuse to keep on hand because I can just make it). I used some homemade pear-applesauce I had in the freezer, but a good store-bought applesauce will do too, I’m sure. (Mine was definitely chunkier than Motts, though.) We liked it so much that I immediately made a second batch and put it in the freezer, though for next time, I might just double the amounts and bake it in a 9”x13” dish instead.

In a medium bowl, mix together butter, brown sugar and egg until smooth. Stir in applesauce. Combine flour, baking soda, salt and spices; stir into the applesauce mixture until well blended. Spread evenly into the prepared pan.

Bake for 25 minutes. Remove from oven and cool on a wire rack. 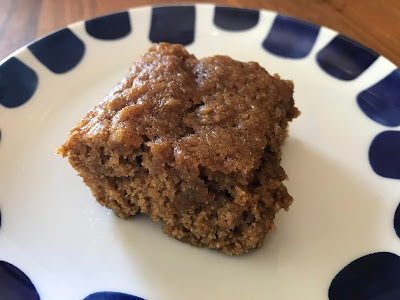