This pie from Modern Honey is right up there with my pumpkin chiffon pie, except you could pass it off as just a really good version of a traditional pumpkin pie. I say this is traditional-style because that’s really what it tastes like, but it is non-traditional in the sense that instead of evaporated milk, it contains cream cheese and melted butter (or margarine, in this case). And yet it wasn’t at all like cheesecake, it was just rich and a bit creamy, but I wouldn’t even have guessed that there was cream cheese in there! This is going to be one of repertoire from now on. It would be perfect for your Thanksgiving table next week!

For the pie crust, I used a store-bought one, but you could make a half-recipe of this one. Note that I also changed up the spices a bit; the ones below are my mixture.

Make pie crust recipe according to recipe directions and place it in a deep-dish pie pan.

Preheat oven to 400 °F and place an oven rack in the lowest position.

In a mixing bowl, whip cream cheese for 5 minutes until light and fluffy, scraping down the sides often with spatula. Add pumpkin and mix for another 5 minutes. Add melted butter and vanilla and mix for 1 minute. Add eggs one at a time, mixing well after each addition. Add powdered sugar, spices, and salt.

Pour pumpkin pie filling into pie crust and place pie plate on baking sheet. (Depending on the size of your pie pan, you may have some extra filling.)

Bake for 15 minutes. Lower the temperature of the oven to 350 °F and bake for an additional 42 to 48 minutes. Watch the crust carefully to make sure it isn't becoming too brown. Cover with pie cover or foil to prevent browning if needed. This wasn’t an issue in my case, but I did leave the pie in there for an additional 30 minutes because the center was still a bit too jiggly.

Once baked, let chill in refrigerator for 4 hours.

Top with your whipped topping of choice, if using. 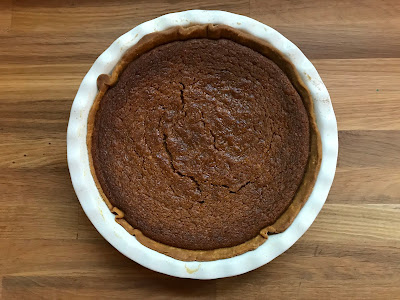 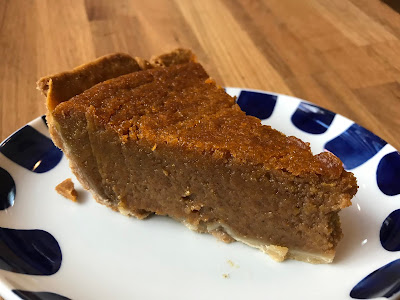