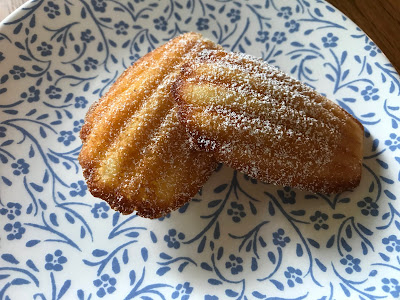 My parents went to France last year and their hotel in Toulouse was across the street from a store that sells all kinds of kitchenware. My mother asked me if I wanted her to bring me back anything, and I couldn’t pass up a madeleine tin! It’s almost flat, so it really didn’t take up that much room in her suitcase, and I love that I have a real French madeleine tin. Finding a good madeleine recipe took longer than I thought, though. I first tried maple almond madeleines that, while good, did not satisfy me. There was too much batter for my standard tin (I would have needed to make something like three batches), they stuck to the pan despite my greasing it, and they were not what I had in mind for a madeleine, as neither the taste nor texture were what I had expected. 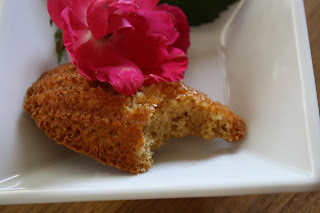 So I looked through some of my cookbooks, and after my initial disappointment that David Lebovit’z Ready for Dessert didn’t have a recipe for them, I realized that Nigella Lawson’s How to Be a Domestic Goddess did have one. But it didn’t work as written, as the baking temperature was much too high; plus, I had to adapt it to my standard-size pan, as opposed to her miniature pan.

The version below is mine, slightly adapted from Nigella Lawson’s. Note that a more traditional version would probably have you replace the rose water with finely grated lemon zest and/or vanilla. Use lactose-free butter if you have it, but know that I used Earth Balance stick margarine without any problem. To be really precise, you can melt 5 tablespoons of it, weigh out 50 grams for the recipe, and use the rest to grease the madeleine tin (with leftovers), which is what I did the first time I made it, but on the second go-round, I found that melting 4 tablespoons total was just enough. Finally, you can put regular sugar in the food processor to make it more like caster sugar – since the amount is given by weight, it’s very easy to measure. These came out perfect! I was very happy with them.

Melt all the butter over a low heat, then leave to cool.

Beat the egg, caster sugar and salt in a bowl for about 5 minutes, preferably with an electric mixer of some sort, until it’s as thick as mayonnaise. Then sift the flour into the egg and sugar mixture and fold it in with a wooden spoon or spatula.

Set aside a scant tablespoon of the cooled, melted butter (for greasing the madeleine tin) and fold in the rest along with the rosewater. Mix well, but not too vigorously.

Leave to rest in the fridge for 1 hour, then take out and leave at room temperature for half an hour.

Generously brush the insides of the madeleine tin (I used a standard tin with 12 indentations) with the tablespoon of butter (melting more if you feel you need it) before filling them with the cake mixture. I had roughly 1 heaping tablespoon per indentation. Don’t worry about covering the molded indentations; in the heat of the oven, the mixture will spread before it rises.

Bake for 8 minutes (you could check a bit before, and if your oven runs colder than mine, it could take a few minutes longer, but mine were spot-on at 8 minutes).

Turn out and let cool on a rack, then dust with icing sugar. 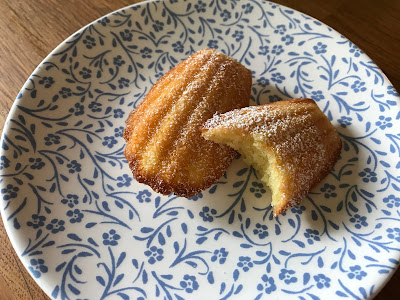