People, this lasagna was fantastic. I think it was the best I’ve ever made, actually, and the fact that it was full of vegetables is just a bonus! I’ll have to put this one into regular rotation. (For the record, the Little Prince wasn’t a big fan, but the Fox loved it as much as the Engineer and I did).

The original recipe is from the June 2017 edition of Parents, where it was called Veggie-Full Lasagna and was made in a slow cooker. The version below is mine, as I’ve adapted it to be made in a regular oven (no-boil noodles FTW!). I also had to adapt the quantities a tiny bit: when I start with half a gallon of lactose-free milk (or about 2 liters), I get 15 ounces of ricotta, so I used that instead of 16 ounces. I replaced the mozzarella with shredded Daiya. Another option might be to replace the ricotta with Miyoko’s fresh mozzarella substitute for a dairy-free lasagna, and/or replace the mozzarella with shredded sharp cheddar cheese for a dairy-full version. For the marinara sauce, I recommend using something with a bit of flavor. I used a 25-oz. jar of Mezzzetta tomato sauce with roasted garlic and caramelized onions, but I think this would be good with basil or garlic tomato sauce as well. I made things easy on myself and used the food processor for all the prep: first shred the parmesan, set it aside, shred the cheddar if using, set it aside, and rinse the bowl; then shred the carrots, set them aside, and rinse the bowl; finally, shred the zucchini, set them aside (and squeeze out the water), switch out the blades, and chop the spinach and basil.

After putting the lasagna in the oven, I had two leftover lasagna noodles. What’s a person to do with two sad noodles? I used this link to find ideas and I ended up making two lasagna “cupcakes” with leftovers from a different meal (turkey and ricotta meatballs, which I’ll blog about later). If they had been broken, the lasagna kugel would have been a good option!

Pour the milk and salt into a nonreactive saucepan. Attach a candy or deep-fry thermometer. Heat the milk to 190 °F, stirring it occasionally to keep it from scorching on the bottom. Remove from heat and add the lemon juice, then stir it once or twice, gently and slowly. Let the pot sit undisturbed for 5 minutes.

Line a colander with a few layers of cheesecloth and place it over a large bowl (to catch the whey). Carefully pour the curds and whey into the colander (mine had as much as it could take) and let the curds strain for at least an hour. Use the ricotta right away or transfer it to an airtight container and refrigerate until ready to use.

In a medium bowl, combine the marinara sauce and the shredded carrots. Set aside.

Cover with tin foil and bake for 60 minutes. Optionally, you could then remove the foil and broil it for a few minutes. Let cool a bit before serving, and sprinkle with more parmesan or basil if desired. 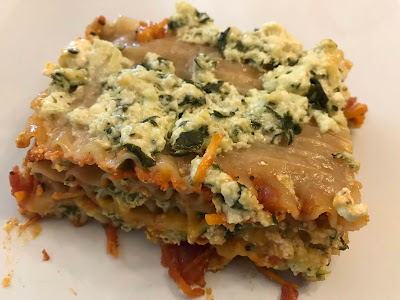 [Update, Dec. 18th, 2018: I made this again last week, using extra sharp cheddar cheese and homemade ricotta, and saving some filling and grated cheddar for the top layer. So the lasagna looked better, and as it turns out, we all prefer cheddar to Daiya. Not only did the Little Prince eat it even though I had just confirmed for him that there were vegetables in it, but he asked for seconds! That’s the way I’m making it from now on. On a side note, I can confirm that when stuck with leftover noodles, one should *never* attempt to make kugel in the microwave. Big mistake.] 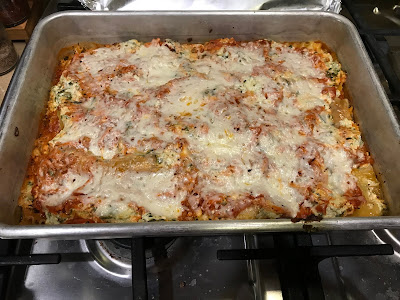 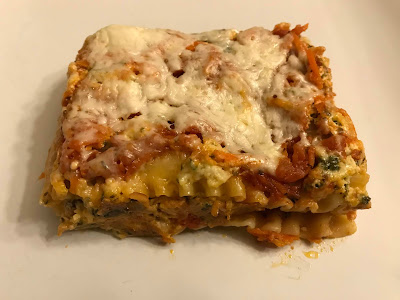