In anticipation of the Little Prince starting school and our collective desire to send him there with a lunchbox most days (as opposed to having him buy something at the cafeteria), I bought the Weelicious Lunches cookbook. I really like it, even though to me it skews very American. By that, I mean that there’s a whole section with variations of the peanut butter-jelly sandwich, whereas I, as a French Canadian, didn’t even realize that PB&J was a thing until my tweens (when I was living in the U.S., I should add), and never once had that in my school lunch. I did have peanut butter on bread in the morning on occasion, but in my family, we always paired it with honey, not jam. In any case, it’s full of a lot of recipes that look great to me, but I’m also afraid that my kid would never go for them. I’ve decided to try some anyway and simply make sure that he has a backup component in the meal that I know he’ll like (for example, I made the beet and carrot salad from the cookbook, but used it as a side and made sure that the Little Prince had another side and a main that he would like – turns out he didn’t magically start liking the salad, but hey, at least I sent him to school with beets in his lunchbox and it wasn’t a total failure, so there’s that).

So, ham and cheese muffins looked like they might work, in that my kid usually likes ham, and cheese, and muffins, so at least there were no red flags. The Engineer bought three thick slices of ham from the butcher, and I cut them into cubes, but only used about half for the recipe, along with half of a package of cheddar. Since I didn’t know what else to do with the rest of the ham and didn’t want it going to waste, I took a chance and simply made a second batch of muffins. A batch is supposed to make 18 muffins, but I ended up with 16 in the first batch and 17 in the second. As it turns out, the Little Prince loved these (phew!), and they freeze beautifully, so they’re a really good addition to my repertoire. Note that instead of a mix of all-purpose flour and whole wheat flour, I used only white whole wheat flour. Suggestion of sides: cucumber slices, red grapes, freeze-dried yogurt dots.

Combine the flours, baking powder, baking soda, and salt in a bowl and stir to combine.

In a separate bowl, whisk the eggs, oil and maple syrup and stir to combine. Add the buttermilk to the egg mixture and stir.

Add the buttermilk mixture to the flour and stir until just combined. Fold in the cheese and ham.

Scoop the batter 2/3 of the way up into the greased muffin cups and bake for 18-20 minutes. 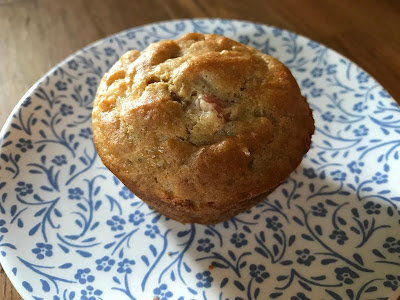 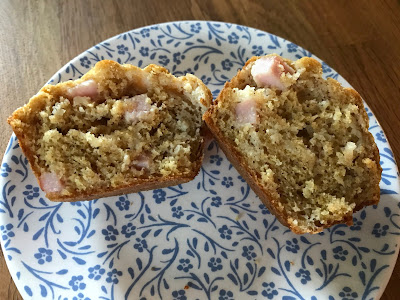