As I was catching up with my magazines early last fall, I came across this great article about Yotam Ottolenghi in Bon Appétit, and I promptly tore out the pages to make his za’atar roast chicken with green tahini sauce. And it was really fantastic. Although, note to self (and I know I’ve said this before, but this time I really mean it): for the love of God, stop serving chicken with the skin and bones! I wanted to give this recipe a chance as is, because it’s from Yotam Ottolenghi and all, but none of us here enjoy the skin or bones in a chicken, and especially here where the skin doesn’t crisp because of the marinade. So we remove the skin, but that takes away all the spices with it… I’m giving the recipe below as it was written, because I would have to adapt the cooking times to skinless, boneless chicken breasts and I haven’t had time to test it. Just know that the next time I’m making this, it’ll be with boneless, skinless chicken breasts. The Engineer and I both love it, though! I roasted some potatoes at the same time to complete the dish, since I wasn’t serving it with salads like in the article. Also, the original recipe had you toss the pine nuts in browned butter, but I’d skip that step entirely next time to keep the dish lactose-free, or omit the pine nuts entirely if I wanted a nut-free version.

For the green tahini sauce
Pulse garlic, parsley, tahini, lemon juice, and ½ cup water in a food processor, adding more water if needed, until smooth (sauce should be the consistency of a thin mayonnaise); season with salt. If making ahead, cover and chill.

Preheat oven to 400 °F. Place chicken, onions, garlic, and lemon on a rimmed baking sheet, spooning any remaining marinade over and around chicken. Sprinkle with za’atar and roast until chicken is browned and cooked through, 45–55 minutes. 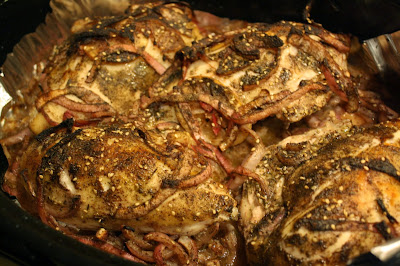 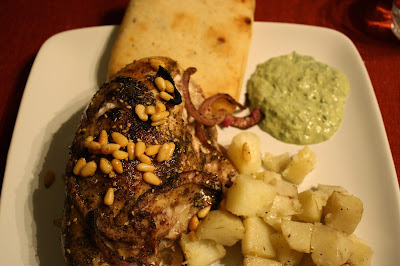 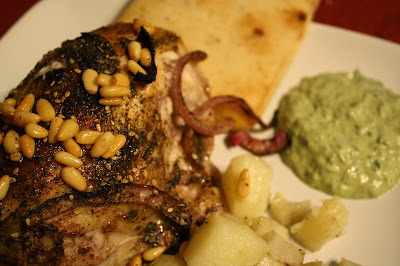 I just made these with thin chicken breasts (skinless and boneless), 15 minutes in a 400F oven. Looks delicious!