I tried a few “healthy” muffin recipes in the past month-and-a-half. There was one that billed itself as You-Won’t-Believe-They’re-Whole-Wheat Blueberry Muffins, but you know what? I could totally believe it. And I didn’t enjoy it. So I scrapped that one. I also tried chocolate quinoa muffins with beet, which happened to be gluten-free, but they were a disappointment. They tasted great, but they fell apart all the time (the Engineer said he didn’t mind, but I certainly did). Plus, the quinoa ended up being crisp and unpleasant to bite into, even though it was cooked. So I scrapped that one too.

But then there were these banana zucchini chocolate chip muffins from Averie Cooks, which reminded me of the ones I got from Garden Lites on occasion. It’s a bit of an odd recipe, in that it makes 11 muffins, and some of them aren’t pretty. I’m including a picture of the muffin tin so you can see what I mean – I think it would have been better if I had put a little less batter in each, and yet somehow I still wouldn’t have had enough for a 12th muffin… I mean, I was filling each tin the same way I do for any other recipe, and when I got to the 11th cup, I was like, “Well, what do you know, this actually does make 11 and not 12!” I reordered the steps below to make the recipe easier. These muffins were very good, and we give them three thumbs up. Next time I make them, I’ll use a little less sugar, because I found them a bit too sweet. The flavors were even better the second day, though. 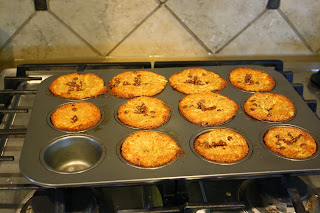 Preheat oven to 400 °F. Spray a muffin pan with floured cooking spray or grease and flour the pan; set aside.

In a medium bowl, mix the flour, baking powder and salt. Set aside.

In a large bowl, whisk together the sugar, brown sugar, coconut oil, milk, vanilla and cinnamon. Add the bananas and whisk to combine.

Before adding the zucchini, put it in a paper towel and squeeze tightly for about 10 seconds to remove some moisture. After squeezing, you should have about ¾ cup of compacted shreds. Add zucchini to bowl and stir to incorporate.

Add the dry ingredients to the bowl and mix until just combined.

Using an ice cream scoop (my preferred method), turn batter out into prepared pan, noting that the recipe yields 11 muffins (trying to get 12 muffins out of this would result in muffins that are too small; each cavity should be filled about ¾ cup full).

Sprinkle the top of each muffin generously with mini chocolate chips, about 1 teaspoon each.

Bake for 10 minutes, reduce oven temp to 350 °F and bake for 8 minutes, or until muffins are set, domed, golden, and a toothpick comes out clean or with a few moist crumbs, but no batter. Allow muffins to cool in pan for about 10 to 15 minutes, or until they've firmed up and are cool enough to handle. (The top will flatten as they cool.) 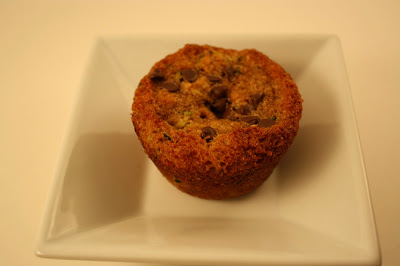 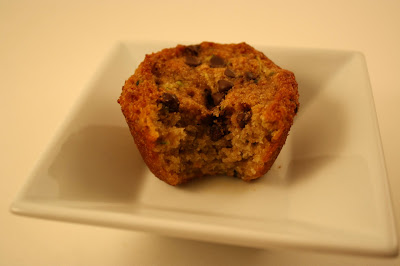