I decided to make some mashed potatoes “like they do on American TV”, which is to say, using my stand mixer. I went with this recipe for garlic and olive oil mashed potatoes because it is dairy-free. I thought it was odd that the recipe called for red-skinned potatoes, because I’d heard those are usually too waxy to make good mashed potatoes, but I liked the result nonetheless. I ended up leaving the skins on (and perhaps that’s the draw of using red-skinned potatoes here?), because I know the Engineer loves it. In his family, mashed potatoes with the skin on was a treat, whereas I didn’t even know this was a thing until I met him. It turns out it’s really good! I served this with tourtière I had in the freezer, and on a side note, I’ve decided that from now on, I’m only freezing cooked tourtières. The potatoes were awesome, though, and I’d definitely make them again.

Into a large Dutch oven, put the cubed potatoes and cover with cold water. Bring to a boil, then reduce heat to medium and boil until fork tender – about 18 minutes or so. Drain and add to your stand mixer (paddle attached) or pass your potatoes through a ricer or mash by hand with a hand masher. In a separate bowl, add the garlic, oil, broth and salt. Whisk that together and pour over the potatoes. Blend in the stand mixer until creamy. Add additional broth if you need to for extra creaminess. Then add the chopped chives, mixing well, and spoon into a serving dish. Serve immediately. 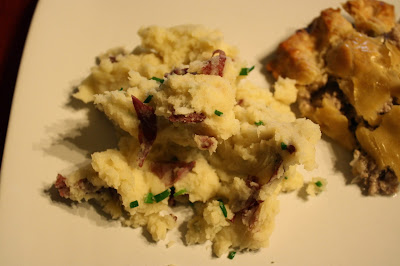