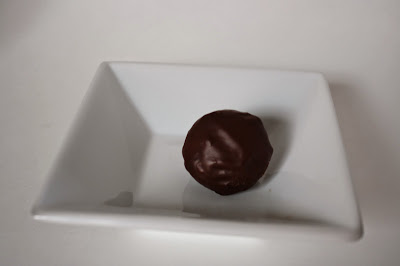 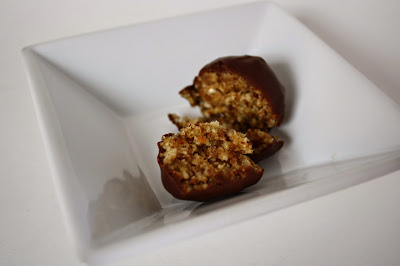 I got this recipe from Gluten-Free Girl. I initially chose it because it helped me use up a lot of nuts in my pantry, though I admit I used pecans instead of walnuts. I also increased the amount of chocolate and coconut milk for the ganache (though I still kept the proportions the same), and used chocolate that was closer to 60% cocoa than 70%. The Engineer and I loved having these in the fridge for a quick treat at various times during the day! This recipe yielded 20 balls for me.

Put the dates, almond flour, hazelnuts, walnuts, coconut oil, honey and salt in the bowl of a food processor. Process until everything is mixed into a fine crumble (but not so much as to make nut butter). The mixture should stick together between your fingers, but it should not gather into one ball. If the mixture feels too dry, add a teaspoon of water at a time.

Grab a tablespoon’s worth of the nut mixture and roll it into a ball. Put it on a parchment-lined baking sheet. Repeat until you have formed all the balls.

Freeze the balls until they are solid.

Put the chopped chocolate and coconut milk into the bowl of a double boiler and set over medium-high heat, stirring occasionally, until you have a smooth chocolate ganache.

Let the ganache cool enough to touch it. Twirl each date-hazelnut ball in the ganache (I like using two forks to do this), then put it on a cooling rack set over a parchment-lined baking sheet until the chocolate sets. (I put them right on the baking sheet because I didn’t mind having a flat bottom on the balls.)

Eat at room temperature for a soft ball that melts in the mouth. Refrigerate before eating for a more candy-like experience (this was our preference). 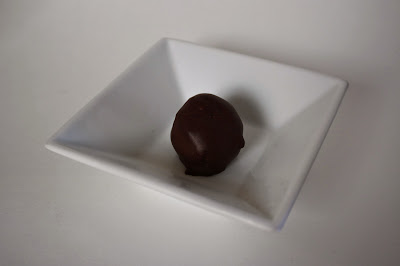 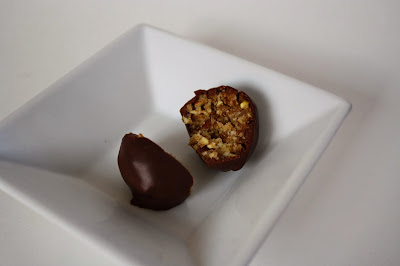