If you’ve been following my blog for a while, or if you are familiar with francophone Christian culture, you’ll know that on February 2nd, we celebrate Candlemas with crêpes. And I’m told our neighbors to the south celebrate with tamales. (To be clear, I don’t believe I know anyone who still celebrates the religious aspects of the holiday, but the traditional culinary aspects, certainly. Those tend to be the best holiday traditions, in my opinion.) I made two kinds of crêpes this year, a new recipe and my old chocolate crêpes. I’ve now decided to renounce my old chocolate crêpes, because they’re really not that great, but I figured I’d share the new recipe. And then it occurred to me that I haven’t talked about last year’s crêpes either, as evidenced by the photo still on my hard drive! So I’m throwing that in. Note that both of these recipes are sweet, but many people will serve a main dish of savory buckwheat crêpes filled with a béchamel, ham and cheese, for example, before moving on to the sweet crêpes for dessert. Leftovers make for a great breakfast, too! And I’m going to mention this because just last summer, some friends of mine thought they were doing something wrong and they didn’t realize it’s par for the course: your first crêpe is usually going to be ruined. It’s really a tester for the heat of the pan and the amount of fat you’ve put in, and it almost seasons the pan for use. At our house, we call it the dog’s crêpe. I also recommend using 2 pans at the same time, to make faster work of the batch.

On a side note, ever since I saw Curtis Stone use a crêpe maker similar to this on Take Home Chef, I’ve been wondering whether that is what I need to make crêpes as thin as those I would like. My mother always made them in a pan, but somehow mine have always been thicker than hers. I always follow recipe instructions, I run the batter through a sieve and have even tried adding extra milk to make the batter thinner, but somehow my crêpes are never thin like hers! I do let the batter rest, and it’s not an issue of putting too much in the pan because even as I tilt the pan a bit to spread out the batter, it never reaches the edges before setting.

The first recipe is the one I made last year. It’s Julia Child’s recipe, which I got from this app (though a scaled down version also appears on Epicurious). I followed the written instructions, which call for a blender, but upon watching the included video, I realized that Julia Child mixes everything by hand. I personally liked using the blender, as it eliminated any lumps in the batter and made things easier – especially for pouring batter into the pan. These are fairly typical crêpes and I would recommend them to anyone who’s making them for the first time.

Put the liquids, eggs, and salt into the blender jar. Add the flour, then the butter. Cover and blend at top speed for 1 minute. If bits of flour adhere to sides of jar, dislodge with a rubber scraper and blend for 2 to 3 seconds more. Cover and refrigerate for at least 2 hours.

The batter should have the consistency of very light cream, just thick enough to coat a wooden spoon. If, after making your first crêpe, it seems too heavy, beat in a bit of water, a spoonful at a time.

Brush the skillet lightly with oil. Set over moderately high heat until the pan is just beginning to smoke. Immediately remove from heat and, holding handle of pan in your right hand, pour with your left hand a scant ¼ cup of batter in the middle of the pan. Quickly tilt the pan in all directions to run the batter all over the bottom of the pan into a thin film. (Pour any batter that does not adhere to the pan back into your bowl; judge the amount for your next crêpe accordingly.) Your cooked crêpe should be about 1/16 inch thick (see my note above). This whole operation takes but 2 to 3 seconds.

Return the pan to heat for 60 to 80 seconds, then jerk and toss pan sharply back and forth and up and down to loosen the crêpe. Lift its edges with a spatula and if the underside is a nice light brown, the crêpe is ready for turning.

Turn the crêpe by using two spatulas; or grasp the edges nearest you with your fingers and sweep it up toward you and over again into the pan in a reverse circle; or toss it over by a flip of the pan. (You can also flip it with a spatula like a pancake if you wish; don’t be intimidated by these techniques.)

Brown lightly for about 30 seconds on the other side. This second side is rarely more than a sporty brown, and is always kept as the underneath or nonpublic aspect of the crêpe (the first side is the ‘hero” side used by food stylists, FYI). As they are done, slide the crêpes onto a rack and let cool several minutes before stacking on a plate. Grease the skillet again, heat to just smoking, and proceed with the rest of the crêpes. Crêpes may be kept warm by covering them with a dish and setting them over simmering water or in a slow oven. Or they may be made several hours in advance and reheated when needed. (Crêpes freeze perfectly, according to this recipe, though I’ve never tried it. If it’s anything like pancakes, then that would be perfect!)

According to the recipe, this should make 25 to 30 crêpes, each 6 to 6½ inches in diameter, but as you can see, I got fewer – I think it was 11, though they may have been slightly larger than recommended. I like big crêpes and I cannot lie. 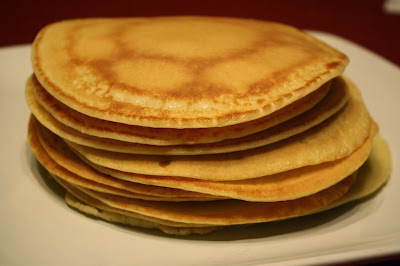 The second recipe, the one I tried this year, is Juliette Brun’s recipe; I went to school with her and she is now the famous and successful owner of Juliette & Chocolat in Montreal. This recipe is different from those I’ve seen before because it contains a lot (a lot!) of sugar. But obviously, it’s absolutely delicious, and it’s once a year, so to hell with nutrition. In her restaurant, these would probably be served with fresh fruit, chocolate syrup and whipped cream. Here at home, I went the more traditional way of lemon juice with sugar for some, and maple syrup for the rest. Warm Nutella also works really well. That being said, these are so sweet that they don’t need much accompaniment! You could halve the recipe if you’re not feeding an army. I keep the crêpes warm in the oven until I’m ready to serve them.

Mix the flour, sugar and salt. Add the eggs, milk and vanilla and mix well. The ideal batter will have the consistency of 35% cream. Let the batter rest in the fridge overnight. (I made mine in the morning, ran it through a sieve before letting it rest, and took it back out again before dinner.)

Use a very hot nonstick pan or cast iron skillet – a drop of water in the pan should sizzle. (The recipe here doesn’t say anything, but I like using a tiny bit of oil in the skillet and replenishing it as needed; this would be less of an issue with a very well-seasoned cast iron pan, I suppose.) Cook the crêpes on medium heat (the technique is fairly standard, so just look at the recipe above for tips if need be). 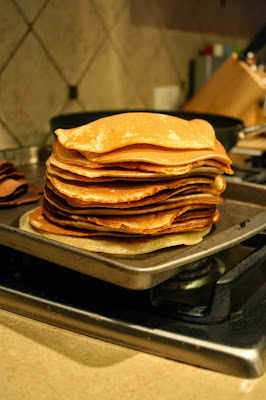 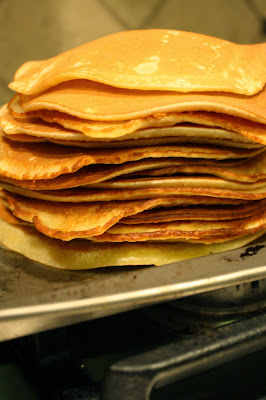 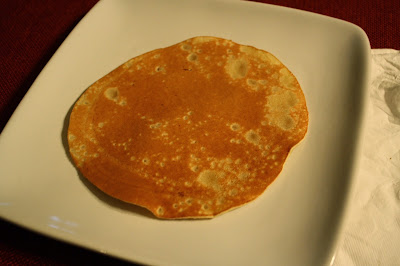 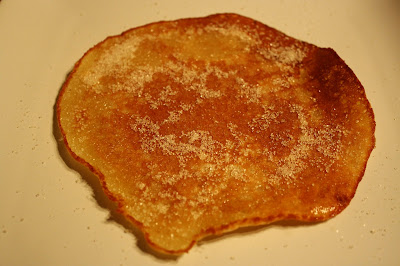