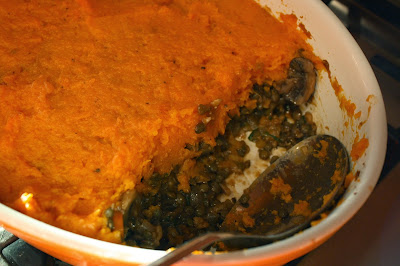 I hesitated to blog about this recipe from The Kitchn, because I’m the only one who liked it. I knew the Little Prince doesn’t usually like lentils, but at least he ate the sweet potato topping (as long as there were no lentils clinging to it). The Engineer didn’t like it either, however, so I ate most of it myself over several days. It should be said that the fact that I managed that means I did think it was good! I thought the lentil and mushroom mixture had some great umami flavor going on and was well-seasoned, the oatmeal was a good binder, and I liked the topping, too. But I admit that as I was eating it, I thought that the potato-cheese topping from this recipe would have been better, and I might combine the two recipes eventually. Perhaps the name is disappointing, but even though I’m reluctant to use the term “shepherd’s pie” for something with sweet potato (and vegan to boot), I can’t really think of anything else.

My major discovery here, though, was bay leaves. I’ve always used them in whatever recipes called for them, perhaps more out of respect for the recipe than anything else, but I was wondering how much flavor they were really bringing. I know that spices can go stale quickly, but even when I opened a new jar or bag, their aroma was very faint and I just wasn’t convinced they were making much of a difference. This time, however, I got a brand new jar (from Morton & Bassett, for those who want to know), and the leaves were a bright, dark green in it – they looked fresher than I’ve ever seen them. As soon as I screw off the lid, I was hit with a powerful smell that reminded me of eucalyptus. And I think that’s when I got it: for my entire life up to that point, I had been cooking with subpar, stale bay leaves! The one leaf I used in this recipe really did make a difference. I’m going to seek out this brand now, and make sure the leaves look fresh when I buy them (now that I know what to look for). Also, I’m now storing them in the freezer.

Preheat the oven to 400 °F. Prick each sweet potato several times with a fork and place on a baking sheet. Roast for 45 minutes to 1 hour, or until very soft to the touch. Set aside to cool.

In a medium pot, combine the lentils, oats, bay leaf, and salt with 5 cups of water. Bring to a boil and lower heat. Simmer uncovered for 15-20 minutes, or until lentils are soft but not mushy, stirring occasionally to keep the oats from sticking to the bottom of the pot. Discard bay leaf and drain mixture into a colander or sieve.

While the lentils and oats are cooking, finely chop half of the mushrooms and set aside. Cut the remaining mushrooms into quarters. Warm the olive oil in a large pot over medium-high heat. Add the quartered mushrooms and a pinch of salt and cook until browned and soft. Add the chopped mushrooms, onion, carrot, celery, and garlic and cook, stirring occasionally, until onions are soft and translucent. Lower heat to medium and add the lentil and oat mixture, followed by the vegetable stock, wine, tomato paste, soy sauce, paprika, parsley, and a few grinds of black pepper. Simmer mixture for 5 minutes. Taste, and add salt or correct the seasonings as needed.

Preheat oven to 350 °F. Peel sweet potatoes and place in a medium bowl. Mash them into a smooth paste and season to taste with salt and pepper.

Evenly spread the lentil mixture into a 9”x13” baking dish. Spoon the sweet potato mixture on top and smooth with a spatula. Bake for 30 minutes, or until the filling is bubbling at the edges. 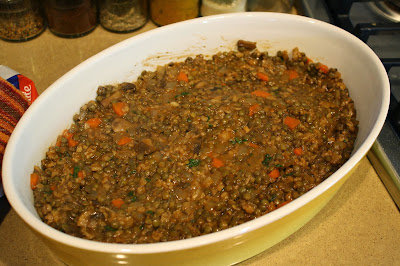 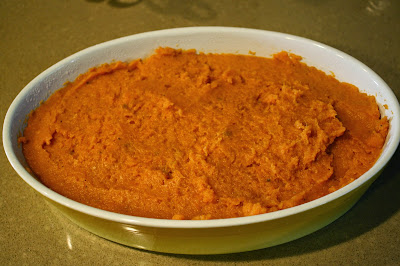 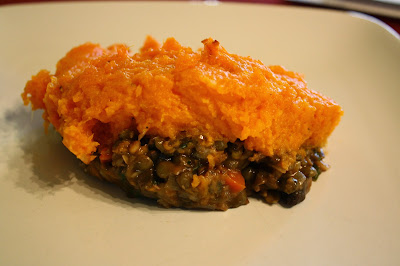