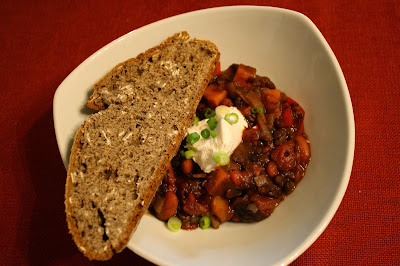 I made a black bean chili before that was somewhat ho-hum. I was a little reluctant to try again, so I kept putting it off. But I recently purged my pantry, and I had some Rancho Gordo turtle beans to use up, so I tried a new recipe from Real Simple. I used this Serious Eats article to figure out that I needed ¾ cup of dried beans (soaked and cooked) to equal a 15-oz. can of beans, and I used this eHow article to figure out how to make the recipe in the oven instead of a slow cooker, since I don’t have the latter. Those are the directions I’m giving you below, but you can refer to the original post if you want to make this in a slow-cooker. I also adapted the spices a bit. In any event, this recipe was delicious! Now *this* is a vegan chili I can get behind. I topped it with lactose-free sour cream and green onions, though grated cheddar would be good, too. I also served it with my mother’s 5-grain soda bread, which to me is the best accompaniment for chili. I once posted the recipe in French, but here is our version, in English. It’s originally an Anne Lindsay recipe, and she calls it a 5-grain soda bread, but upon closer inspection, it’s really only 4 grains: wheat only counts once to me, even if you are using two different kinds of wheat flour! It’s great bread, though, and easy to make.

Preheat oven to 325 °F. In a 4- to 6-quart Dutch oven, combine the onion, bell pepper, garlic, Korean pepper, cumin, cocoa, savory, cinnamon, salt and pepper. Add the tomatoes (and their liquid), beans, sweet potato, and ½ cup water. (In the slow cooker, this was 1 cup, but you’ll need less for this version, and you might even omit it altogether.)

Cover, put the pot in the oven and cook until the sweet potatoes are tender and the chili has thickened, about 2 hours.

Serve the chili with lactose-free sour cream, scallions, sliced radishes, grated cheese or tortilla chips (or whatever your favorites are). 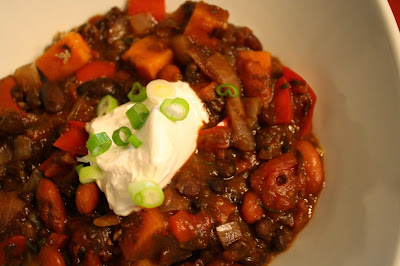 Preheat the oven to 350 °F. Prepare a baking sheet by covering it with parchment paper or greasing it.

In a large bowl, mix all the dry ingredients. Add the oil and buttermilk and stir to make soft dough.

Turn out onto a lightly floured surface and knead about 10 minutes or until smooth. (I did this directly in the stand mixer, with the dough hook.)

Place on prepared baking sheet; flatten into a circle about 2 ½ inches thick. Cut a large X about ¼-inch deep on top. Bake for about 1 hour or until toothpick inserted in center comes out clean. 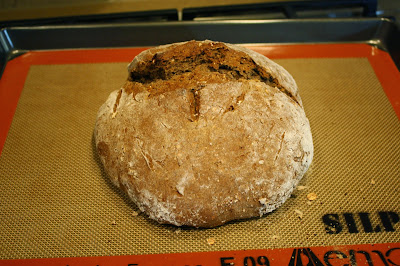 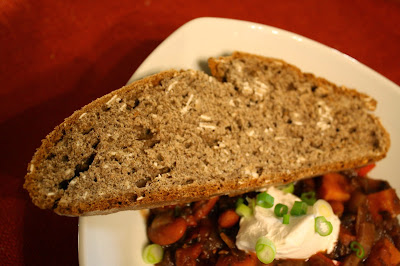