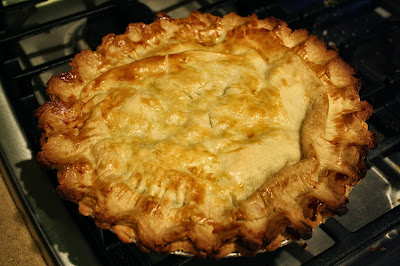 To those of you who are not from Quebec: tourtière is essentially a pork pie. Some people put different meats in there, including venison, and some recipes have potatoes, but this is the bare-bones basic version. It’s traditional fare around the holidays, but to me, it’s a good winter meal! This recipe is from Simple Bites. I liked that it’s un-plain while still being simple, if that makes any sense. It was really good, as a matter of fact! This recipe makes two pies, so I froze one, and I don’t see the point of making any fewer. Since it’s harder for me to cook than it used to be (what with parenting an almost-toddler at the same time), I cut corners and bought pie dough instead of making it. And I’m not even sorry.

In a large, heavy frying pan (I used a saucepan), combine pork with cold water and heat to boiling point. It should be slightly soupy.

Stir in rolled oats and cook, stirring, for 1 to 2 minutes. Remove bay leaves and allow to cool.

Meanwhile, line two 9-inch pie plates with pastry. When meat mixture is lukewarm, divide it between two pie shells and spread it out evenly. Brush around outer edge of pastry with the beaten egg. Place top crust on the tart and press gently around the edge to seal. Trim pastry, crimp edges and cut steam vents in top crust. Decorate as desired.

[Pies can be frozen directly after assembly, with the dough still raw. Wrap them well in plastic wrap and freeze. To cook, remove from the freezer and unwrap; brush the top with a little beaten egg and place frozen meat pie directly in a preheated 375 °F oven. Bake until golden and heated through, about 50 minutes.

These pies can also be frozen after being cooked. In that case, remove the pie from the freezer a few hours before serving, if possible; wrap in foil to keep it moist and warm in a low (300 °F) oven until heated through.] 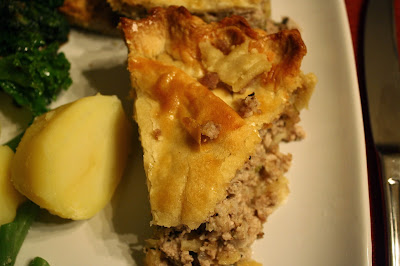 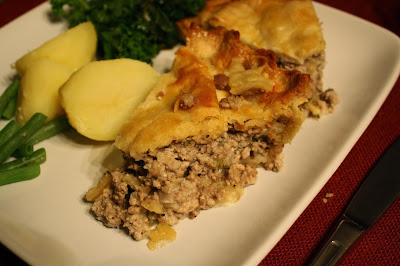