Let’s catch up on a few desserts I made lately but haven’t blogged about. I made what was a VERY good chocolate banana cake, vegan to boot, but I have no good pictures whatsoever, so I can’t do a whole post about that. And an apple and pomegranate tarte tatin that was okay, though homelier than expected (despite a beautiful color) and a little too sweet for my taste (which is saying a lot). The crust did have the interesting addition of sour cream as well as butter, but it was less noticeable than I had hoped in the finished product. I won’t bother making it again. There was also a luscious pumpkin cake, which was somewhat blander than it should have been. 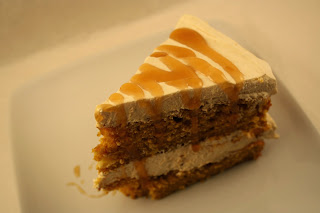 These vegan cupcakes, however, were different from any I’ve made before, and definitely good enough that I want to share them! They’re from Alicia Silverstone’s book The Kind Diet, where she refers to them as her favorite cupcakes. What a surprise they were! I went into this curious about the frosting, which is different because it calls for soy milk powder. I mean, I had tried something like it before at some point (I believe it was for cupcakes from the BabyCakes cookbook), but I didn’t keep that recipe, so obviously it hadn’t worked like I wanted. Yet I somehow still had hope that this one would work. (Interestingly enough, the recipe does mention that the soy milk powder can be omitted and the frosting will only be runnier. Personally, I’d keep it, though you could use rice milk powder if you don’t like soy.)

The cake itself turned out beautiful, with a good crumb, albeit a little healthy-tasting – it might have been better to use white whole wheat flour instead of a mixture of white and whole wheat. Then, as I was making the frosting, it looked like it would fail, but it was a revelation! It was sweet and had a great consistency once all the ingredients were mixed properly. I’d definitely make these cupcakes again. Note, however, that I buy my agave nectar in 11.75-oz. containers, which isn’t enough for the recipe; I topped it off with maple syrup.

Combine the milk and vinegar in a medium bowl and set aside for at least 5 minutes or until it bubbles a little. (According to America’s Test Kitchen, this step isn’t strictly necessary, but I did it anyway.)

In a large bowl, combine the flours, baking powder, baking soda, and salt. Set aside.

By now, the milk should be ready. Add to it the agave nectar, oil and vanilla and stir.

Add the wet ingredients to the dry and mix until just combined and no lumps remain.

Pour the batter into the prepared muffin tin, and bake for 18 to 22 minutes or until a toothpick inserted in the center of a cupcake comes out clean and the tops are slightly springy when pressed. Cool the cupcakes in the pan for 10 to 15 minutes, then cool completely on a rack before frosting.

For the frosting
Use a mixer to cream butter and agave nectar. When smooth, add vanilla extract and about half the cocoa powder; mix on low speed to combine, then add the remaining cocoa powder. Add in the soy milk powder and beat at medium-high speed until fluffy. If it is runny, refrigerate the frosting until it sets up a while (I did not have to do this, but I imagine that’s what happens if you omit the soy milk powder). 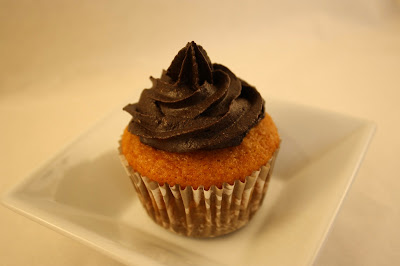 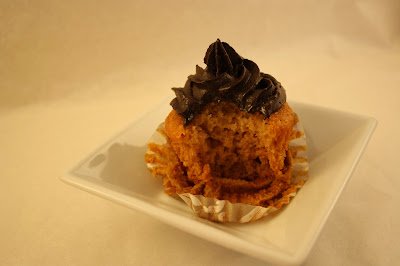