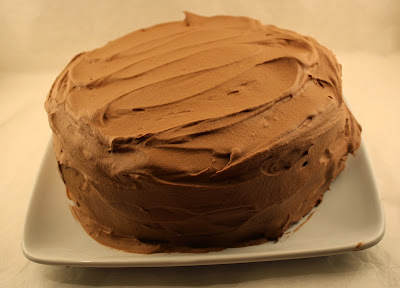 This recipe is from Live Journal, though I must admit that I do not remember where I found that link. But the important thing is that I have this recipe. I’m editing the presentation and wording below, for clarity, but the recipe is for the same dark and delicious chocolate cake posted by the user. I only urge you to line your pans with paper instead of just greasing them and flouring them, as the original recipe suggested, because that wasn’t enough to keep the cakes from breaking when I unmolded them… The cake itself is a good chocolate cake, perhaps somewhat unremarkable in and of itself (and certainly not like the steamed chocolate cake I thought this recipe was for originally!), but what makes it really special is the frosting, which the user says is from Joy of Cooking. It’s not a frosting so much as a mousse, and it’s just luscious and decadent when spread over cake! I made it with butter, so I had to take Lactaid, and I’m not sure that this would work with margarine (too soft) or shortening (too bland). The Lactaid was worth it, though, and since this cake is very rich, it lasted for several days in the fridge. It would definitely be a good choice for a birthday cake, or a party where you have guests to help you polish it off!

Preheat the oven to 350 °F. Grease two 9-inch round pans; put parchment or wax paper on the bottom and grease again.

Melt the chocolate in a double boiler. Set aside to cool.

In a medium bowl, whisk together the flour, baking soda and salt. Set aside.

Cream the butter with the sugar. Add the eggs, one at a time, mixing well after each addition. Add the vanilla and cooled chocolate and mix again.

Add about a third of the dry ingredients, mixing only to blend, then half of the sour cream, mixing again. Continue adding the ingredients, alternating and ending with dry ingredients. Finally, add the boiling water – the batter will seem very thin, but this is normal.

Bake for about 35 to 40 minutes or until a toothpick inserted in the center comes out clean. (I’d check mine at 30 minutes next time, as it seemed a bit dry.) Let cool before turning out onto a rack.

In a heat-proof bowl (I used a metal one as a double-boiler), whisk together the eggs, powdered sugar, lactose-free milk and salt. Set the bowl over a pan of simmering water and whisk until the mixture reaches 160 °F. (I did bother doing this, but I think if you use pasteurized eggs, it’s not such a big deal.)

Remove from the pan and add the chocolate and butter, whisking until they have melted into the mixture. Add the vanilla and whisk one last time.

Get another bowl and make it into an ice water bath. Set the bowl of chocolate in it and, with a handheld mixer on high speed, beat the ever-living heck out of it until the frosting takes shape. (I couldn’t do this, as I don’t have a handheld mixer here, so I used the stand mixer and periodically set the bowl in an ice water bath for 30 seconds or so. I wouldn’t worry too much about cooling it down quickly, though.) The chocolate mixture will be dark and glossy at first, but as you beat it, it will slowly lose its gloss and become lighter. Keep beating until it becomes smooth and lush.

Frost your cake as desired, ideally taking care to make a crumb layer. The frosting can be stored in the fridge, though it should be mixed again before being spread on the cake. 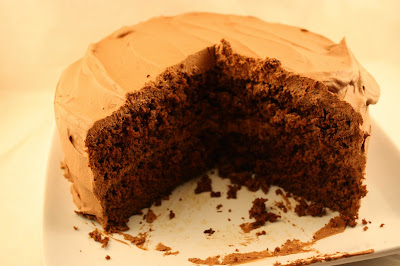 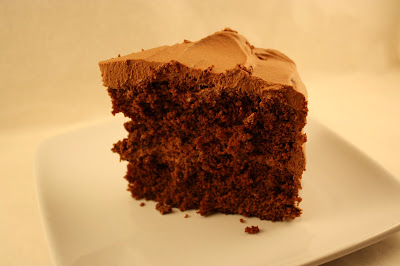