I used a disclaimer on several posts in the past months because I’d made certain recipes using GO Veggie! lactose-free products that had been sent to me for free by the company. It’s high time I elaborated on that! Late last summer, I got an email on behalf of GO Veggie! asking if I was interested in receiving free samples. I had bought their plain and chive & garlic cream cheese substitute before, but that was pretty much it. I read the email over and realized that they had products I’d never tasted, like a strawberry cream cheese substitute, and some that I’d never even seen in stores. So I decided to accept their offer and expected to get some flavored cream cheese and maybe a few other things. I didn’t think about it for a while, and one day when I came back home from the dentist, the Engineer said, “I don’t know what you did, but you got a visit from the cheese fairy while you were out!” Look at everything we got! 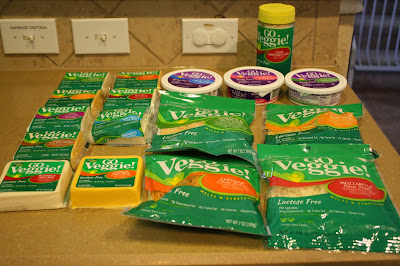 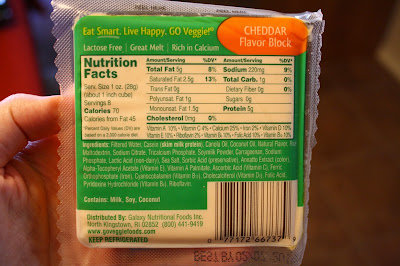 That’s a block of cheddar, a block of mozzarella, a container of grated parmesan, three kinds of cream cheese (plain, strawberry, and chive & garlic), four kinds of grated cheese (mozzarella, cheddar, a cheddar and pepper jack mix, and a cheddar and Monterey jack mix), as well as seven – count ’em, seven! – kinds of sliced cheese (smoked provolone, pepper jack, cheddar, mozzarella, cheddar with jalapeño, American, and Swiss). I tasted them and I think this is relevant to the blog, as these are all products that can come in handy for people who are lactose-intolerant. Just to be clear, though, while I got all these products for free, I am not actually getting paid to write this review.

I haven’t seen all these products at my grocery store, so you might have to go to specialty stores or talk to your grocer to try some of them. Keep in mind that while they are lactose-free, they are not all dairy-free or vegan, so they are not suitable for people with dairy allergies, for example. As this page on their website explains, GO Veggie! products have some advantages over dairy and over many dairy substitutes, like fewer calories, less fat (no cholesterol and no trans fats, actually), and more calcium. And, of course, they’re lactose-free.

For those of you who are interested: the cream cheeses are dairy-free (casein-free) and soy-based; they are also vegan and kosher. In addition, the following products I got are dairy-free (casein-free), soy-free, vegan and kosher: shredded mozzarella, as well as sliced American, cheddar, mozzarella and pepper jack. The other products are made with soy and do contain some form of dairy, though not lactose. (This may go without saying, but just to be safe: always check the label before eating something if you have an allergy, because sometimes companies change recipes or suppliers or packing plants, so the information here may be out of date eventually.) GO Veggie! also makes products that I did not taste, so I can’t speak for those, but there are alternatives not mentioned here if your food restrictions prevent you from trying them (such as a dairy-free grated parmesan substitute).

Let’s do this methodically, shall we? For the blocks of cheese (cheddar and mozzarella), I am not fond of eating them straight. To be fair, I don’t think I’ve ever had vegan cheese that I enjoyed eating raw like that, so for me, a lactose-free dairy cheese is a better choice. (Though to be clear, these GO Veggie! blocks of cheese were not vegan because they contained some dairy; they just tasted vegan, if that’s a thing.) That being said, I grated them and used them in a mac and cheese: it was very good! The Engineer, the Little Prince and I all approved.

As for the grated parmesan, it wasn’t as good as real parmesan, but it was definitely on par with parmesan from a green can; it also smelled remarkably similar! I use it to top dishes, like the spinach and ricotta crêpe lasagna I made. This cheese isn’t vegan either, but the website says there is another dairy-free one. However, I only recently realized (or was reminded?) that real parmesan isn’t even vegetarian, as it contains animal rennet; GO Veggie’s grated parmesan is vegetarian, as far as I can tell.

For the sliced cheeses, I had the Engineer test the spicy ones in his sandwiches. Of the pepper jack cheese, he said that it had a weird texture, but it grew on him. Of the cheddar with jalapeño, he says that he likes it and that it adds a nice kick of extra heat to his sandwiches. I tasted the smoked provolone in a grilled cheese sandwich and liked it, as it satisfied cravings. The American cheese was somewhat bland and didn’t get me excited, but I could say the same about the dairy version, too. I tried some sliced Swiss raw in a sandwich and did not like it; it tasted better when grilled, but I still prefer the real thing (as it is lactose-free anyway). I had some of the cheddar in a quesadilla, and it was okay. To be a little different, I tried the sliced mozzarella on a croquet-monsieur; it was alright, though it didn’t melt as well as I would have liked. (In the pictures below, the white cheese is the smoked provolone, and the orange cheese is the American.) 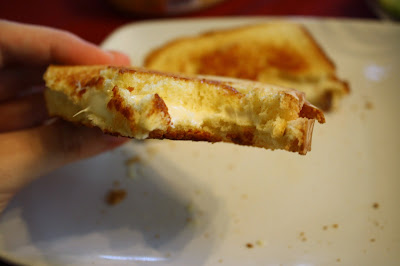 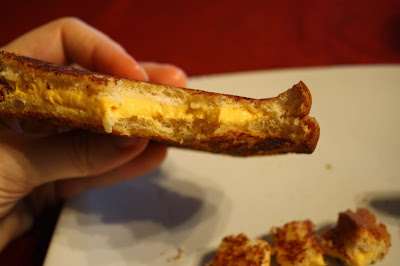 I tried the shredded mozzarella on pizza, and I was really impressed because this cheese mot only melts, it stretches! I thoroughly approve. It was great in tacos, too. The Engineer ate the cheddar and pepper jack mix; he liked it in sandwiches, and it baked up very well in biscuits, too. I used the cheddar and Monterey jack mix in a Mexican lasagna and I couldn’t even tell it wasn’t real cheese! I used shredded cheddar in an omelet, and it was good, though nothing unexpected by that point. 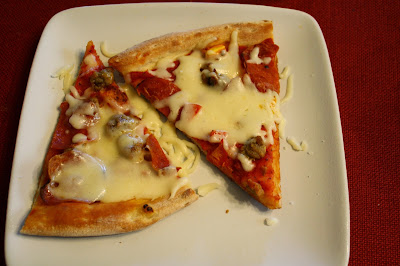 Finally, the cream cheeses: I’m including an image sent by GO Veggie! with ideas for different flavor combinations – I never got around to trying them, mostly because I rarely serve hors-d’œuvres like that, but some of these combinations looked really good to me. I enjoy the chive & garlic one on crackers mostly, or on a bagel for lunch, but it isn’t the kind of thing I like for breakfast. I think it would also be really good in a savory dish like a lasagna that calls for cream cheese. As for the plain cream cheese, I compared it with Daiya’s version, and I preferred GO Veggie! because it wasn’t as sweet. Sweet is fine if you’re making frosting for a cake, for example, but when you just want plain cheese on a bagel, I prefer a more neutral taste. The strawberry cream cheese is made with soy, and when eaten by itself, the soy is really obvious, but it was great on a sesame bagel! It also had the consistency of real cream cheese, so that was good. I used both the plain and strawberry cheeses in frosting for rhubarb cupcakes, and both worked really well. 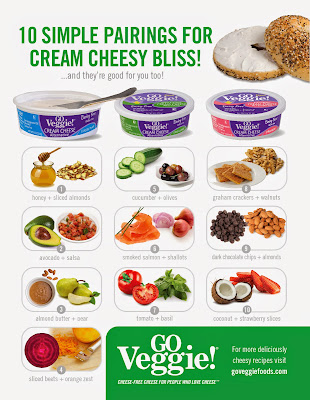 In conclusion, I really liked discovering all these new products, because it gives me new lactose-free options for my cooking. I hope the same is true for you after reading this post.

Their quality deliverables this hyperlink and set them up for potential future engagement.