Because we can't say no to apple cake

I know, I know. I’ve told you about apple cakes before. There was my ”stout” apple cake, Bubbie Gilda’s apple cake, French apple cake, and apple tart cake. And I’ve got a few more up my sleeve. But somehow I made another one, slightly adapted from Sweet Amandine, and it was good enough that I decided to keep the recipe… The Engineer also approves and says that it has a good, dense crumb, with brown sugar that you can taste without being overwhelmed by it. He also likes the crystallized sugar on top, as do I. I’m changing the cooking time slightly below, as I would have liked to test the cake 5 minutes earlier than I did. I also changed the flour a bit, replaced some of the oil with applesauce, and omitted the nuts, obviously. Enjoy!

In a medium bowl, whisk together the flours, salt, cinnamon, and baking soda. Set aside.

Dump the packed brown sugar into the bowl of a stand mixer and unpack it with a fork. Add the oil, and use the fork to moisten all of the sugar. (If you skip these first steps, the brown sugar will get pressed up against the sides of the bowl instead of mixing with the oil.) Beat the oil and sugar together in a mixer fitted with the paddle attachment. After five minutes, add the eggs and the vanilla, beating after each addition, then continue beating until the mixture is creamy.

Add the dry ingredients into the sugar, egg, and oil mixture and stir by hand until just combined. Fold in the apple slices. It will look like a lot of apple and not enough batter, but it all works out in the end.

Transfer the batter to the prepared pan, sprinkle with demerara sugar if you'd like, and bake for about 40-45 minutes, until a toothpick inserted in the center of the cake comes out clean. Cool in the pan before turning out. 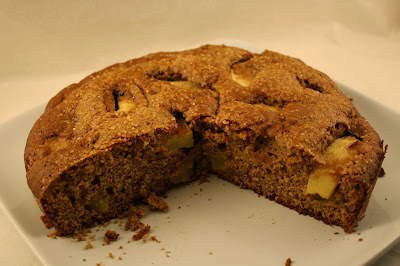 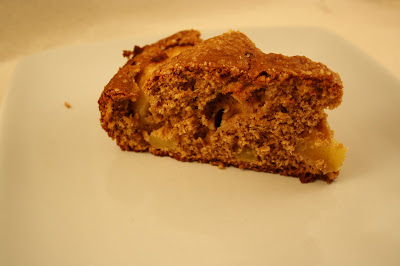