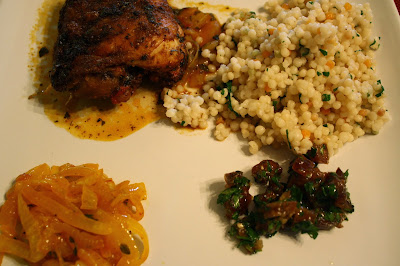 This recipe had been sitting in my inbox for 2 ½ years already. The story behind it is that my mother’s colleague from work at the time heated his lunch in the microwave, and it smelled so good that my mother asked for the recipe, then shared it with me. But it’s one of the longest recipes I’ve seen, and it just seemed so daunting that I didn’t have the heart to make it (and neither did she). But last month, my mother came to visit us for several days, so we made it together. When I wrote it down on that week’s menu, I wrote “Complicated Chicken”. I might as well have called it This-(Damn-Well-)Better-Be-Good Chicken, but in the end, the original title is more descriptive. I’m not exaggerating when I say this: the spice mix is prepared the night before so that the chicken marinates overnight, and then that evening’s preparations took us 2 ½ hours. That’s 150 minutes of non-stop cooking by two fully capable adults (though, to be fair, we did have to entertain the Little Prince at the time as well, and after a little more than 2 hours, we started a Baby Einstein video for him to keep everyone sane).

You know the old adage that the degree to which children like dinner is inversely proportional to the time you spent making it? It turns out it’s absolutely true. The Little Prince hardly touched his dinner the first night. On the second night, however, when all we had to do was reheat it, he had an almost voracious appetite and really liked the dish. As for us, we thought it was very good, but not enough to go through the trouble of making it all again the same way. The recipe below contains a few modifications that we implemented (such as omitting the chile de arbol or not putting plastic wrap in the oven, for God’s sake). Next time, however, we would bake the chicken in a Dutch oven, with half as much broth and fewer vegetables (the fennel, for instance, was surprisingly washed out and could probably be omitted). You could also use a small fresh tomato instead of leaving most of a can of tomatoes unused. My mother would prefer regular couscous, to soak up the sauce better, but I prefer the texture of pearled couscous. It’s not that any of these steps is complicated per se (couscous is easy; the date relish is stupid-easy; the saffron onions take a while, but are not hard), but all together, it’s too much for one cook on a weeknight, especially if kids are involved.

We also argued semantics: is the date condiment really relish? After looking it up, we realized that what defines relish is basically the addition of vinegar. While this condiment isn’t very acidic, the lemon juice might qualify it as relish, so we decided to keep calling it that. In any event, this dish makes about 6 servings, so at least you get leftovers for all the work you put in. And it IS really good.


For the spice rub
Toast the cumin seeds and coriander seeds in a small pan for a few minutes until the seeds release their aroma and are lightly browned. Grind them in a spice mill or a mortar and pestle. In a small bowl, combine the ground spices with the garlic, thyme, parsley, and paprika.

Place the chicken in a large bowl; sprinkle the spice mixture over it and, using your hands, toss the chicken and spices together, coating well. Cover and refrigerate for at least 4 hours, but preferably overnight. 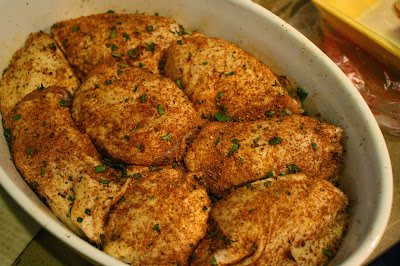 For the chicken
Remove the chicken from the refrigerator 30 minutes before cooking, to allow it to come to room temperature. After 15 minutes, season the chicken on all sides with salt and pepper. (We may have missed this step.)

Heat a large sauté pan over high heat to 2 minutes. Swirl in the olive oil and wait 1 minute. Place the chicken legs, skin side down, in the pan and cook for 8 to 10 minutes, until golden brown and crispy. Every so often, swirl the oil and rendered fat around in the pan. Turn the legs over, reduce the heat to medium and cook for 2 more minutes on the other side. It may be necessary to do this in 2 batches, adding oil if necessary. (Also, as was noted above, I’d do this in a Dutch oven next time and keep using that for the rest of the recipe.) Set the browned chicken aside.

Pour off some of the fat and return the sauté pan to medium heat. Add the onions, fennel and bay leaves. Cook for 6 to 7 minutes, stirring often, until the vegetables are lightly caramelized. Add the tomatoes and cook another 5 minutes, stirring and scraping with a wooden spoon. Add the sherry vinegar, white wine and sherry. Turn up the heat to high and reduce by half. Add the chicken stock and bring to a boil. Add the cilantro, give it a stir and then spoon the vegetables into the bottom of a large casserole or braising dish. Arrange the chicken in one layer in the dish, skin side up, and then pour the broth over it. The liquid should not quite cover the chicken. (This was fine in a roasting pan. However, using a Dutch oven and keeping the lid on might allow for the use of only half the amount of broth, thereby avoiding waste later in the recipe.) Cover the dish in aluminum foil, place in the oven and braise for 1 ½ to 2 hours. While the chicken is braising, make the sides.

For the date relish
Toss the dates with the olive oil, lemon juice, parsley and cilantro. Season with salt and pepper.

For the saffron onions
Toss the saffron threads in a small pan over medium heat until they are just dry and become brittle. Be very careful not to burn the precious saffron. (We erred on the side of caution here, especially given that saffron is brittle to begin with! As long as it’s fragrant, call it a day.) Pound the saffron to a fine powder with a mortar and pestle.

Heat a large sauté pan over medium heat for 2 minutes. Add the olive oil, butter and saffron. When the butter foams, add the onions, bay leaf, and thyme, along with salt and pepper. Cook 8 to 10 minutes, stirring often, as the onions wilt. Turn the heat down to low and cook for another 20 minutes, stirring every now and then, until the onions are soft and sweet. Taste for seasoning.

For the couscous
Bring a large pot of salted water to a boil over high heat. Add the couscous and cook 6 to 20 minutes, until tender but still slightly al dente. Drain the couscous, return it to the pot and toss with the butter, parsley and a pinch of pepper. Taste for seasoning.

By now, the chicken should be ready. To check the chicken for doneness, remove the foil, being careful of escaping steam, and pierce a piece of chicken with a paring knife. It should yield easily and be tender, but not quite falling off the bone. (We used a thermometer to gauge doneness.)

Turn the oven up to 400 °F. Transfer the chicken to a baking sheet and return it to the oven to brown for about 10 minutes. Pour half the chicken broth and vegetables into a sauté pan and heat over high heat until it has reduced and become thickened. Pour the thickened sauce into the bottom of a serving dish and pile the crisped chicken on top of it.

The second time I plated this for myself, I put the chicken and sauce on top of the couscous, and I liked that better than when it was next to it. The onions are fantastic and would go well with almost any other dish, too, as would the date relish. If you make it this far, sit back, relax, and enjoy a great meal. Worry about the dishes later. 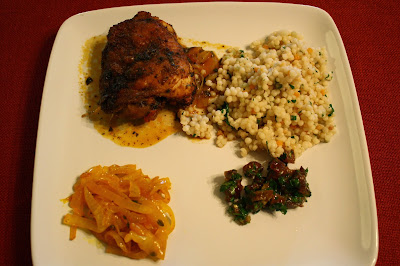 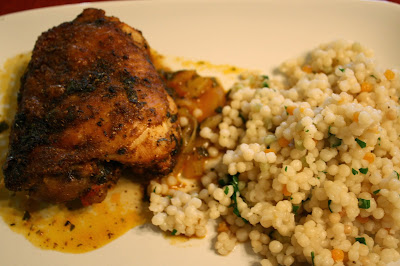 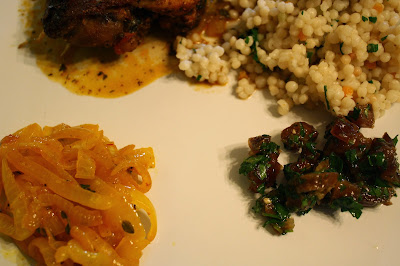