You remember last fall’s attempts at pumpkin ice cream, right? I talked about them here and here. I tinkered with spices and custard base, but the problem was the consistency: too hard once in the freezer for more than a few hours. So I upped the fat content, I used coconut milk with guar gum, and I tried adding arrowroot starch after tempering the yolks (arrowroot which, by the way, worked for me before, and that’s how it’s done in The Vegan Scoop for just about every kind of ice cream, including pumpkin). Still, I didn’t get the consistency I wanted. I’m wondering if that’s just the way it’s meant to be – it is, after all, a downfall of many homemade ice creams, even non-vegan ones with sour cream. According to Serious Eats, the only thing left to do would be to replace some (or all) of the sugar with liquid sweetener such as corn syrup. But you know what? I’ve made this a half-dozen times already and I’m tired of tinkering with it, especially since the arrival of a cold front makes me want warm food, not ice cream. So the following is my pumpkin ice cream, inspired by a Herbivoracious recipe. I made it last month and loved the taste. Just remember to take it out of the freezer 10 to 15 minutes before you want to eat it. I might try liquid sweetener if I make it next year, though do report in the comments if you try it! You could also use 1 tsp. pumpkin pie spice instead of the spices below.

1 cup pumpkin purée (canned is fine; I used Farmer’s Market Organic, and it was delicious)
1 14-oz. can of coconut milk with guar gum (such as Thai Kitchen)
1 cup coconut cream (NOT cream of coconut, NOT creamed coconut)
2/3 cup sugar (up to ¾ cup if you want it sweet)
1 pinch of salt
¼ tsp. cinnamon
¼ tsp. nutmeg
¼ tsp. ground ginger
¼ tsp. allspice
6 egg yolks (ideally from pasteurized eggs)

Whisk together the pumpkin purée, coconut milk, coconut cream, sugar, salt and spices in a saucepan. Heat and whisk until the sugar is dissolved.

In a separate bowl, whisk together the yolks. Gradually pour some of the coconut milk mixture over the yolks, whisking constantly as you pour. Scrape the warmed yolks and coconut milk back into the saucepan.

Cook over low heat, stirring constantly and scraping the bottom with a heat-resistant spatula, until the custard thickens enough to coat the spatula.

Strain the custard if needed, then refrigerate to chill thoroughly.

Freeze in your ice cream maker according to the manufacturer’s instructions. 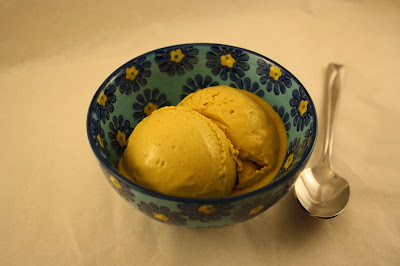