Two cardigans, a hat and an owl

I’ve seriously slowed down in my knitting since last summer. It took me most of the fall to make just one baby sweater, and with three babies on the way among my friends, that didn’t bode well… Luckily, we’ve now got a solid bedtime with the Little Prince, which usually means that I can knit for an hour in front of the TV each evening. I’ve been able to complete a few projects that I thought I’d share.

First, there was a cardigan by Dale of Norway. It’s pretty funny how that came about, because I saw it on Pinterest, where it linked to this blog, and I just loved the white version. The pattern, by Dale of Norway, is available for free in English here. The funny part is that if I had only seen the picture on the pattern, a gaudy pink cardigan with crocheted flowers, I wouldn’t even have looked twice at it. But the white version, with a different collar, was lovely! So I ended up making it for my friends D. and N.’s baby, in a neutral grey. The recommended yarn (the same as for the last sweater I had made) would have taken too much time to knit up, so I used Debbie Bliss Rialto Lace in Medium Grey, doubled up. I already knew from previous knitting projects that I love that yarn for baby cardigans, as it’s soft and breathable, and it knits up pretty quickly. The harder part for me, though, was that this cardigan is knit from the bottom up, and because I was trying to put button holes all along the border instead of just at the top, this threw me off. I feel like the cardigan is a little too long from the armpits to the bottom edge. This may work out just fine, as I know I don’t like it when things ride up on my baby’s tummy, but it’s not my best cardigan. I went a little crazy with the buttons, because the mother-to-be was adamant that everything she was buying for her baby had to have owls (or penguins or elephants) on it, so I found cute buttons on Etsy to match her theme. 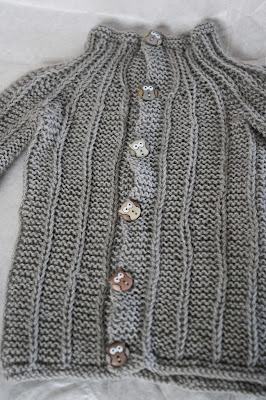 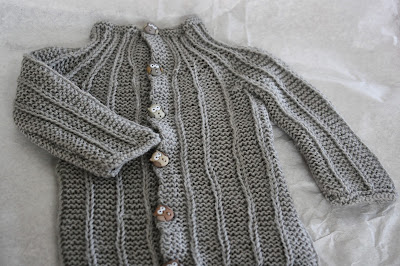 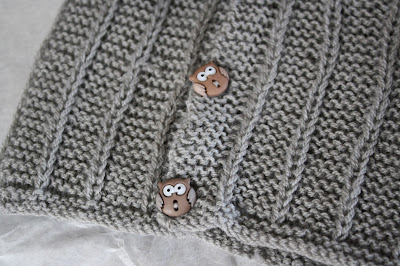 By pure serendipity, I happened to be going through some sewing bookmarks I had and eliminating the ones I wouldn’t be using after all, and I came across this owl stuffie tutorial on Hammer and Thread, so I adapted it slightly and made them a stuffed owl from fabric scraps I had lying around. I think I even like it more than the cardigan! 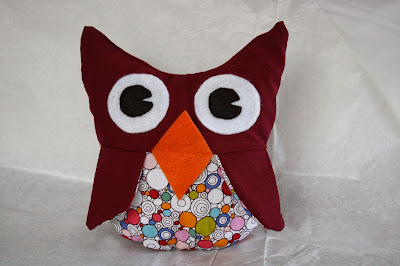 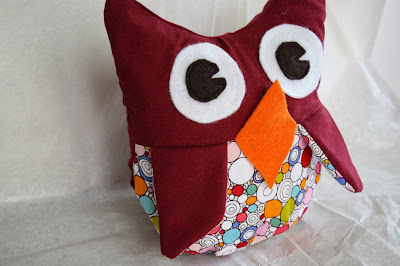 The next thing I knit, for my friend V.’s little boy, was a cardigan with the button row offset to the side. I found it here via Pinterest, and the pattern is available for free here. I just loved the stripes in the first picture I had seen, so that’s what I went with. I used more Debbie Bliss Rialto Lace, in Gold and in Stone, along with some wooden buttons. This was easy to knit, and I love it so much that I decided to make another one in a bigger size for the Little Prince – that project is in the queue, now. The only thing I’d change would be to knit the collar first and just continue on to the body, top down (as it is now, the body is knit top down, then you have to pick up stitches along the top and knit the collar upward from there, which is a little inconvenient). I made sure to knit the body and all the borders first, so that I wouldn’t run out of gold yarn; then I just weighed the rest to make sure it was evenly divided between both sleeves, but it turns out that one skein of each color was plenty for the 3-6 mo size. 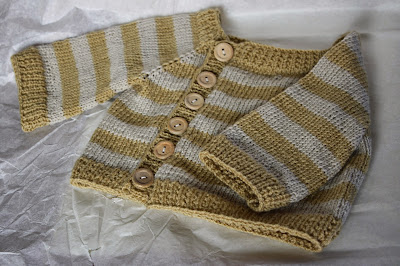 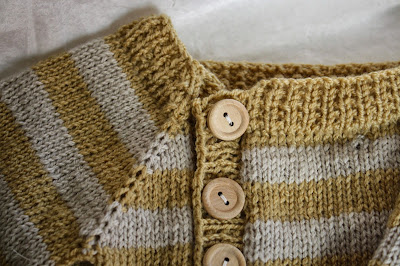 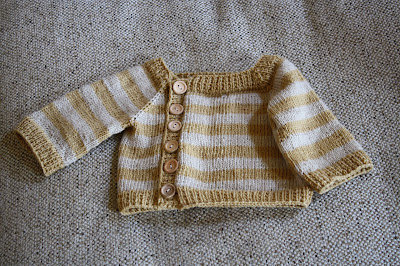 Finally, I made good use of a pattern called December Stripes Hat, designed specifically to use up leftover scraps of yarn that wouldn’t otherwise be enough for a single project. I used up four different shades of blue, and even then I ran out a bit before the hat was as tall as I would have wanted it, but I like the result. The design is really nice, and is just perfect to make something nice from the stash! I also learned a Latvian braid technique for the edge, which was pretty neat. I knit this on short circular needles, which I find easier than double point needles. 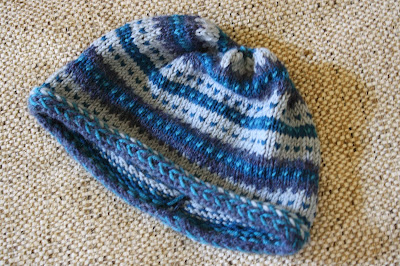 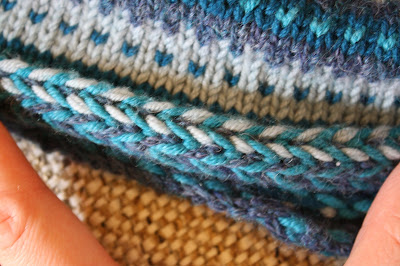