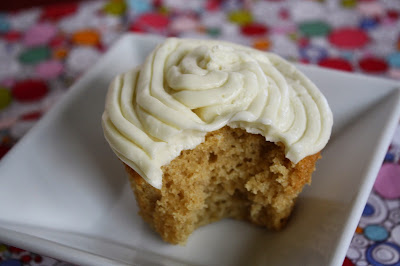 This was probably my last citrus recipe of the winter. I only have a handful left on my to-do list, but I think the window has closed and I’ll have to try until next season. I did manage to find yuzu juice, though, albeit from an online source. It turns out that it’s a small bottle that keeps in the fridge, so it’s not necessarily seasonal… Yuzu is a sour citrus, and the flavor reminded me somewhat of a bitter mandarin. The zest and juice are used in cooking, but it isn’t usually eaten raw. I think it would be great in salad dressing, but in this case, the buttercream frosting was a great way to showcase its flavor. I got this recipe from Dessert First, where it was paired with a coconut cupcake. The Engineer liked the cupcakes, but I found them a bit oily and thought these were better. In any case, you could use your favorite vanilla cupcakes, too. As for the buttercream, I made it with a bit less butter than was called for, and I liked it. I tried a vegan version with shortening and margarine, but that did not work at all, so I’ll stick to this version even though it has lactose. The recipe below should be enough to frost about 18 cupcakes or one cake. Also, for whatever reason, I realized that when I was piping the frosting onto the cupcakes, I used my left hand (while the right hand was holding the bag closed), even though I’m right-handed! I’ll try to get more even piping next time…

Combine the sugar and egg whites in a medium heatproof bowl and place over a pan of simmering water.

Whisk the sugar mixture constantly over heat until the sugar is dissolved and the mixture looks smooth and shiny, about 3 minutes.

Remove mixture from heat and pour into a stand mixer bowl. Whisk on medium speed for about 5 minutes until the mixture has cooled.

Switch to the paddle attachment and with the speed on low, add the butter a few pieces at a time, beating until smooth.

When all the butter has been added, beat the buttercream on medium-high speed for about 6-10 minutes until it is very thick and smooth.

Add in the yuzu juice and beat until combined.

The buttercream is ready to be used. Place a piece of plastic wrap against the surface until you are ready to use it to prevent it from drying out. 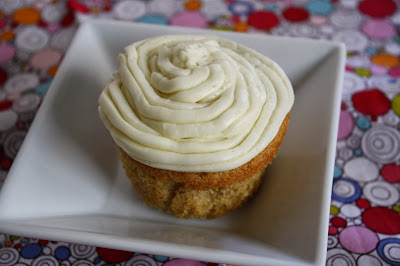 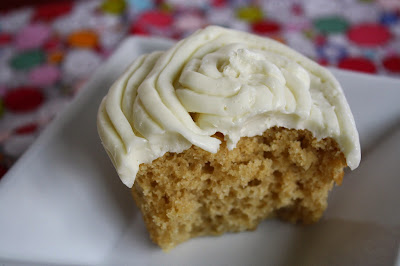