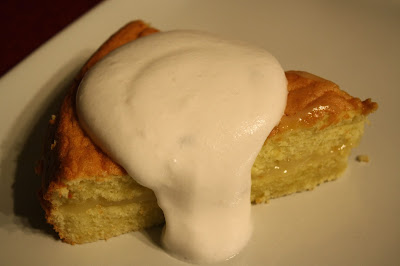 This is what I did with the last of the Meyer lemons from my garden. I had quite a crop this year, as I counted a total of 32! To recap: I used 3 for a pudding cake, 6 for bars, another 6 for bread pudding, 6 more for the first cake, 2 for the risotto (I zested them and froze the juice, which I used for this recipe here), another 2 for the marbled cake, and finally, a total of 7 fresh lemons for this cake. I actually ran out and used some Eureka lemons for part of the recipe, but I’d say that’s a darn good run this year!

So, this recipe is adapted from Epicurious. I think it’s a great way to showcase Meyer lemons and their more floral taste as compared to Eureka lemons. They also go really well with the olive oil and the lavender, which was pretty subtle (always err on the side of caution with lavender: too much will taste like soap, but just a little will give you that je-ne-sais-quoi you’re after). Since I can’t get lactose-free cream down here, I used Kineret, and it worked beautifully! I also used a 9” springform pan instead of an 8” one, and cut my cake in 2 layers instead of 3 (mine was not nearly as tall as the one on the original post). Also, note that the cake recipe has you use 5 eggs, separated, while the curd calls for only 1 yolk. This leaves you with an extra white, and I hate when that happens, so I separated all 6 eggs and used 6 whites and 5 yolks in the cake, and the remaining yolk in the curd. It was absolutely delicious! It makes for a golden, spongy cake with a delicate citrus flavor, and it’s just lovely with the honey lavender cream.

For the curd
½ cup plus 1 Tbsp. sugar
3 Tbsp. all-purpose flour
½ tsp. salt
1 tsp. grated Meyer lemon zest plus ¾ cup Meyer lemon juice (I used 4 fresh Meyer lemons, the juice of 2 more that I had frozen ahead of time, and about ¼ cup of Eureka lemon juice to top it up)
1 large egg yolk
1 Tbsp. unsalted butter or margarine

To make the cake
Preheat oven to 325 °F and set the rack in the middle. Grease an 8” or 9” springform pan; line the bottom with parchment paper and grease again. Dust with flour and tap out excess.

Whisk whites (see note above) with salt in another clean large bowl at medium-high speed until foamy, then add remaining ¼ cup sugar a little at a time, beating, and continue to beat until whites just hold soft peaks. Gently fold one third of whites into yolk mixture to lighten, then fold in remaining whites gently but thoroughly. Transfer batter to springform pan, smoothing top, and gently rap against counter once or twice to eliminate any air bubbles.

Bake until golden brown (top will crack slightly) and a wooden pick inserted in center of cake comes out clean, 40 to 50 minutes (in my 9” springform pan, 35 minutes were enough). Cool in pan on a rack 10 minutes, then remove side of pan and cool cake to room temperature, about 1 hour (sides will cave in a little).

To make the curd while the cake cools
Whisk together sugar, flour, and salt in a small heavy saucepan, then add lemon juice in a slow stream, whisking until combined. Bring to a boil, whisking constantly, then simmer, whisking, until thickened, about 3 minutes. Remove from heat.

Whisk yolk in a small bowl, then add about one fourth of lemon-juice mixture, whisking vigorously. Whisk into remaining lemon-juice mixture and gently boil, whisking, 1 minute. Remove from heat and stir in butter and zest. Transfer filling to a bowl and cover surface with buttered parchment paper or plastic wrap. Chill until cool, at least 30 minutes.

To make the lavender cream while the curd cools
Bring cream or Kineret, honey, and lavender blossoms just to a boil in a small saucepan, then remove from heat and let steep, covered, 30 minutes. Strain through a fine-mesh sieve into a bowl, discarding solids, and chill lavender cream, covered, until cold.

To assemble the cake
Invert cake and discard parchment. Cut cake horizontally into 3 even layers with a long serrated knife. (I only cut mine in 2 layers, because I’m not masochistic.) Transfer 1 layer, cut side up, to a cake plate. Lightly whisk curd to loosen, then spread half of filling evenly over cake layer on plate, leaving a ½-inch border around edge. (I used all of it at once.) Place a second cake layer over filling and spread with remaining filling in same manner. Top with remaining cake layer, cut side down, pressing gently so that filling is spread to edge of cake.

Just before serving, beat lavender cream with a whisk until it is thickened and barely holds soft peaks. Serve cake with dollops of lavender cream. 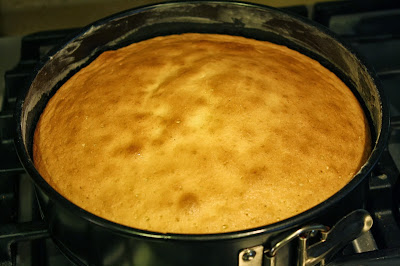 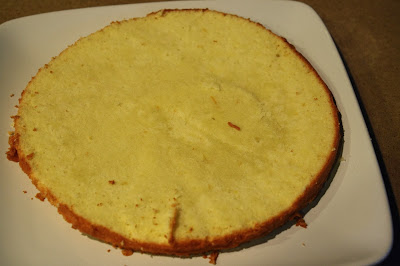 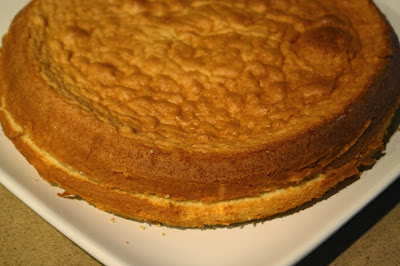 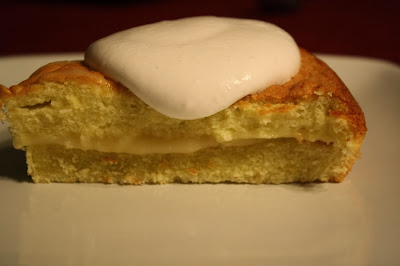