I was in the mood for a chocolate pie recently. I had a recipe bookmarked for Minny’s chocolate pie, from the movie The Help. I had high expectations, but the pie was a disaster. I must admit I had to substitute a few ingredients to make it dairy-free, but overall it was extremely sweet (with filling that was more sticky than anything else) and not very chocolatey at all (3 tablespoons of cocoa? that’s it?). The texture was all wrong and the pie was ugly to boot. That chocolate pie actually made me so miserable that I threw some of it away.

Then, my friend Jen shared Chloe Coscarelli’s recipe for chocolate cream pie (from the book Chloe’s Vegan Desserts). And it was really good! As Jen says, it isn’t good “for a vegan pie”, where you could taste the substitute, it’s just good! I may reduce the amount of sugar a little next time, though that depends on what kind of chocolate you use. The Engineer said the filling was like high density pudding, almost like a new state of matter, but he swears he likes it. Note that this pie has to chill in the refrigerator for 8 hours (or overnight), so make it earlier than you want it! For the crust, the original recipe says to pulse vegan chocolate cookies in the food processor, mix that with ¼ cup melted vegan margarine, press it into a pie plate and bake it at 350 °F for 10 minutes. I used a store-bought chocolate cookie crumb crust, and you could just use your favorite regular crust, too. Finally, the original recipe calls for coconut whipped cream, but I still haven’t had any luck finding a good brand of coconut milk with which to make it. I tried a different recipe (from Coup de Pouce) which failed miserably, so I just used some RiceWhip and called it a day.

In a small bowl, whisk together the vegan milk and arrowroot starch. Set aside.

In a medium saucepan over medium heat, whisk together the coconut milk, sugar and salt just until boiling. Reduce heat to low and stir in the chocolate chips. Let cook, whisking frequently, until completely smooth.

Turn the heat back up to medium and slowly drizzle in the vegan milk mixture, whisking continuously. Whisk frequently for 5 minutes until the mixture is very thick, like pudding. (I wouldn’t let it thicken quite like pudding next time, as it does continue to set in the fridge later.)

Pour the filling into the pie crust. Let cool to room temperature and then refrigerate for 8 hours or overnight (the pudding will set).

The pie can be served as is, or with a vegan whipped topping and chocolate shavings. 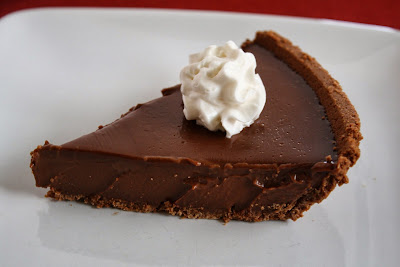 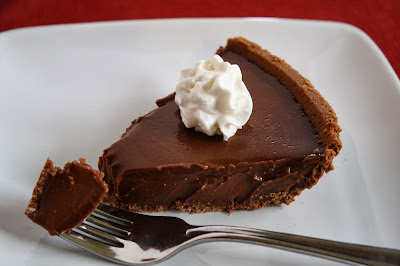 Glad you liked it!

Hey, very nice site. I came across this on Google, and I am stoked that I did. I will definitely be coming back here more often. Wish I could add to the conversation and bring a bit more to the table, but am just taking in as much info as I can at the moment. Thanks for sharing.
mango juice