I’ll make this a round-up of the last items I had in the freezer. I didn’t mention the beef and turkey burgers with herbs (which were from Coup de Pouce, but the recipe isn’t online): I don’t have decent pictures, and they were good, but not great. I also made tuna and white bean pitas which, although the recipe specifically said they should be frozen, were horrible once thawed (still partly icy while already being mushy from excess water). I’d consider making them again to eat right away, but not for the freezer!

I also had fruit smoothie packets, but it turns out I’m happier with smoothies when I have a little frozen fruit and a lot of fresh fruit, as opposed to all frozen, because otherwise they are too bland and too thick. So that didn’t work for me. I also didn’t really like energy balls (I tried peanut butter banana and hemp cocoa; the leftover hemp seeds were good in salad and pesto, though).

In the end, the best thing left in my freezer was a half batch of kitchen sink granola. See, when I make granola, I do one of two things: follow a recipe, or follow a formula. The latter allows me to throw in odds and ends from the pantry, which is always convenient. The batch I made to clean out the pantry before the birth of the Little Prince was so good, though, that I wrote down the ingredients to make it again someday. I often seem to end up with most of a bag of raw peanuts, too, so I’m sure I’ll have ample opportunity! I’m naming this one Peanut Maple Granola, and if I were to change just one thing, it might be to use less sugar. The rest is awesome! [Update, October 2019: I made this again, with raw mixed nuts instead of raw peanuts, and using ½ cup of brown sugar. I wouldn’t go any lower on the sugar, but this seems like a good amount!]

Preheat oven to 300 °F. Spray a roasting pan (or a large baking sheet) with cooking spray.

In a large bowl, mix all ingredients until well combined. Spread them on the roasting pan and bake, giving it a good shake every 10 minutes or so, until it is browned to your liking (maybe 30 minutes in all).

Let cool completely, then transfer to an airtight container. 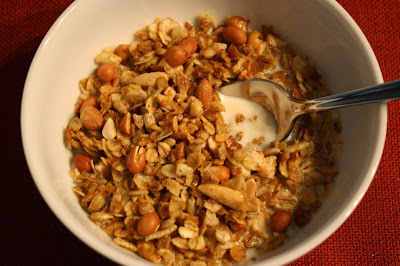