We recently hosted our friend the Actor for a week. It was really nice to have company, but it also gave me an excuse to try a few more recipes. One in particular was this baked pumpkin oatmeal – I got the recipe via our mutual friend Jen, who had made it before to great acclaim from the Actor. It has the somewhat unexpected addition of caramelized bananas, but the combination really works! If anything, I’d use 3 bananas instead of 2 next time, because I didn’t have enough to cover the bottom of the dish. Regardless, the Actor said the texture was “godly” (!) and maintains that this oatmeal is “like crack”. The Engineer said it was awesome, and I love it too!

Place the steel cut oats in a large bowl with 4 tablespoons of the butter. Pour the hot water over the oats and cover the bowl. Let stand for 20 minutes.

Meanwhile, make the caramelized bananas. Melt the remaining 2 tablespoons of butter in a medium skillet over medium-high heat. Add the bananas, 2 tablespoons of brown sugar, and ¼ teaspoon of the cinnamon to the pan. Toss gently and cook briefly, about 2 minutes. Remove from the heat and let cool.

After the steel cut oats have finished soaking, stir in the old fashioned oats, remaining ½ cup of brown sugar, maple syrup, salt, remaining 2 teaspoons of cinnamon, nutmeg and cloves. In a small bowl or liquid measuring cup, whisk together the pumpkin, milk and vanilla. Stir the pumpkin mixture into the oat mixture.

Spread the bananas over the bottom of the prepared baking dish. Pour the oatmeal mixture on top of the bananas. Bake for 35-40 minutes. Remove from the oven and let cool slightly before serving. 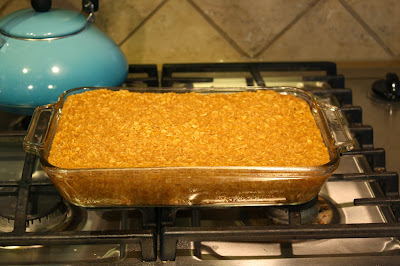 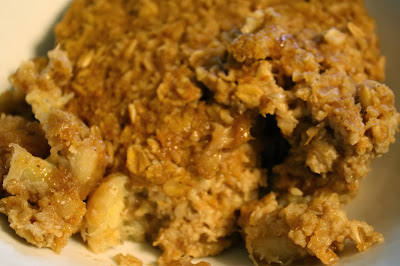 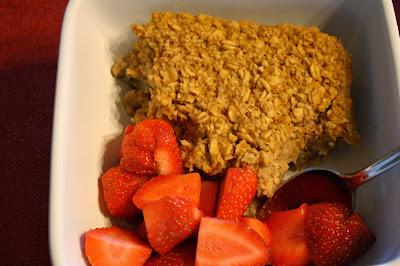 With some leftover pumpkin purée, I went ahead and made pumpkin crêpes, though I tweaked the recipe slightly – nobody should be putting baking powder in crêpes, unless they want to end up with pancakes (but then they should make pancakes in the first place). The recipe yields about 10-12 crêpes, and I found them very good, a nice twist on a classic. I served them with maple syrup, but powdered sugar might be nice, too.

In a large bowl, whisk together flour, sugar, salt and spices. Set aside.

In a small saucepan over medium-low heat warm the milk and butter until the butter’s almost melted. Stir melted completely. Transfer to a medium bowl. Whisk in the eggs, pumpkin purée, and vanilla.

Add the wet ingredients to the dry and whisk until smooth and no lumps remain.

Meanwhile, heat a crêpe pan or nonstick skillet at medium heat. Melt about a teaspoon of butter or margarine (or your oil of choice) on the pan. Pour batter into the pan 1/3 cup at a time twirling the pan so the crêpe batter thins and spreads out covering the pan. Flip when top is almost set. Remove from pan 30 seconds after flipping and place on a cookie sheet in a 200 °F oven. Feel free to melt butter on your pan every few crêpes to prevent sticking. (I found that doing this just once at the beginning was enough.) Serve warm, with maple syrup. 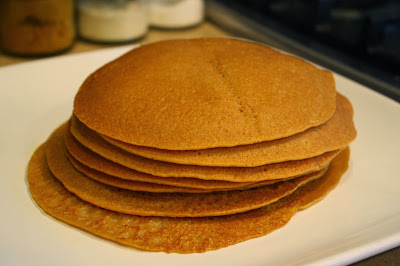