I’d been sitting on Ashley Rodriguez’s bean pie recipe for a while, mostly because it calls for evaporated milk, which is definitely not lactose-free. I did find a substitute recently, though: mix 2/3 cup dry milk powder with ¾ cup water to get 1 cup of evaporated milk (the link is to one of several sites with this ratio). Now, dry milk powder still isn’t lactose-free, but you know what is? Dry SOY milk powder! So I made my own and forged ahead with this recipe.

For those of you who haven’t heard of bean pie before, it’s basically reminiscent of pumpkin pie, with warm spices and a mashed vegetal substance. It was actually quite good! It was very sweet, and I think that beans are bland enough that they are a great, inexpensive filling here.

My first comment is that the original recipe made WAY too much filling, enough not for 2 pies baked in store-bought crusts, but for 2 pies baked in homemade deep dish crusts – which is to say, 4 store-bought pies. That’s too much for anyone, so the quantities I give below are halved (i.e., 2 store-bought crusts OR 1 homemade deep dish crust). The filling was *very* liquid, so I’ll use 2 eggs as the half-measure for 5 eggs, which should help. As I was making it, I also decided that given the warm spices, I really didn’t think lemon extract or yellow food coloring were appropriate. Since I had so much leftover filling, though, I did try some lemon extract and baked some in ramekins and tasted it both ways. I can confirm I prefer it without the lemon! So that’s reflected below.

Preheat the oven to 350 °F and set the oven rack on the second-to-lowest position. Prick the crust with a fork, line it with tin foil and add pie weights. Parbake the crust 20 minutes or so, until it is golden but not burnt.

Cream together the sugar and margarine (I did this in the stand mixer). Add the remainder of the ingredients and mix thoroughly. Pour the filling into the crust and bake until set, about 50 minutes. (Note that this is the original baking time; I found that both the shallow pie tins and the deeper ramekins were done at the same time, so that’s what I’d go with regardless of what pie plate you use. Just be sure that the filling is mostly set, with perhaps just a bit of jiggle left in the center.) 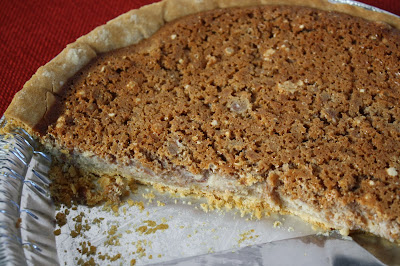 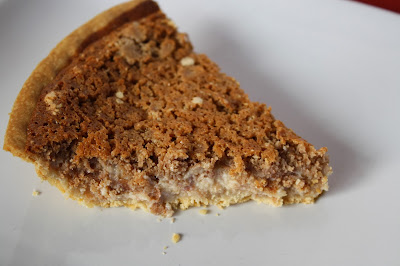