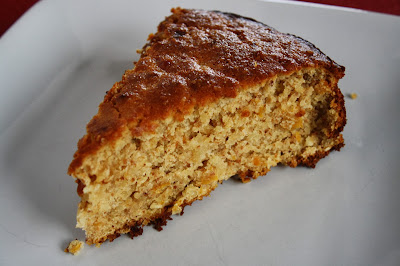 What can I say, it’s citrus season, so I’m making lots of things with Meyer lemons. I made a Meyer lemon risotto with the zest of two lemons (and I froze their juice for future use), but I felt like their flavor was lost and indistinguishable from that of a Eureka lemon. Plus, it was very close to my barley risotto (which is delicious, but I feel like this new recipe isn’t the best use of Meyer lemons and probably isn’t different enough from my standard to warrant republication).

So then I made cake. More specifically, I made this Meyer lemon cake from Food Gal which uses whole lemons, rind and all! They basically replace the butter, while adding a lot of flavor and moisture. The recipe calls for a pound of lemons, which should be about 6 to 8 lemons. In this case, though, since you’ll be eating the whole lemon, I’d recommend getting pesticide-free ones if at all possible. Mine were from my garden, so I wasn’t too worried. I didn’t bother making the lemon glaze (1 Tbsp. Meyer lemon juice + ½ cup powdered sugar). You could also dust the cake with confectioners’ sugar and decorate it with lemon slices, but I served it plain. The Engineer said that the cake had a neat texture, which he described as “granular without being grainy.” I liked the lemon flavor, and thought the almonds came through nicely, too (hence the texture). I’d say this is a bubbie’s Meyer lemon cake, if there was such a thing!

Put whole lemons in a large pot over high heat, cover with cold water, and bring to a boil. (Let’s be honest here: lemons float. You can’t cover them with water. Just put enough water in the pan that they can move around freely, then cover the pan.) Lower heat to medium and simmer until soft, about 30 minutes. Drain; transfer lemons to a bowl of ice water. Cut lemons into quarters when they have cooled and gently remove seeds, retaining as much juice as possible. Blend lemons in a food processor until they’re a smooth, thick purée.

Preheat oven to 350 °F. Butter and flour a 9-inch springform pan. (I recommend also adding waxed paper on the bottom and greasing that as well, because I couldn’t get my cake off the bottom of the pan.)

Whisk together egg yolks and sugar in a large bowl until thick and pale yellow. Stir in lemon purée and almond extract. Add almond-flour mixture and stir to combine. Stir in candied ginger. Set aside.

Bake until edge of cake begins to pull away from side of pan, about 1 hour. (If the edges begin to brown too quickly, you can tent them with foil.) Cool on a rack for 15 minutes, then remove from pan and cool completely. 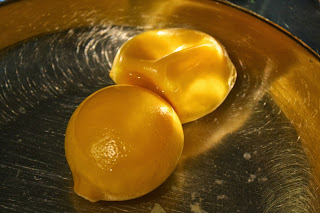 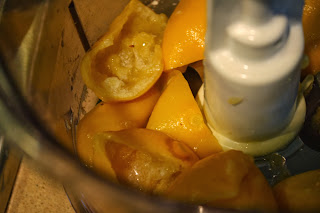 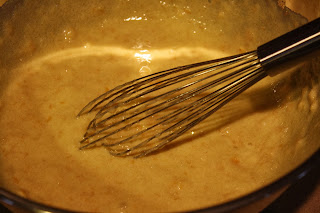 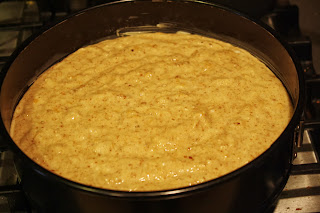 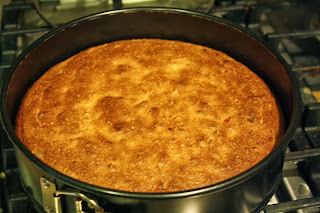