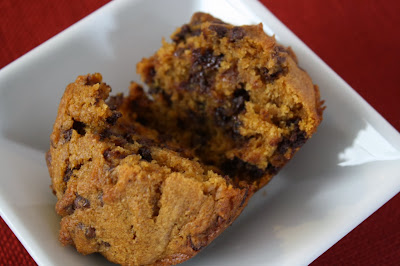 Alright, so here’s more of my forays into pumpkin this season (well, since we’re now in January, the season is technically over, but I made these before the holidays and I might try one more recipe before calling it quits). I tried lactose-free pumpkin ice cream. I started with a vegan recipe, using ½ tsp each of cinnamon, nutmeg, ginger, cloves and allspice instead of the 2 tsp. of pumpkin pie spice, but it was too bland and not sweet enough. It also froze into a solid block after a night in the freezer. I did notice, however, that the coconut milk I had used was somewhat watery, and I wonder whether fluctuating fat content in the coconut milk could have affected this ice cream. It was Goya brand, which seems to be more readily available now than what I used to buy (I remember a lot of Thai Kitchen in particular, but couldn’t tell you exactly what I used for ice cream before). For the record, I always buy regular coconut milk, never light, but after doing some research online, it would seem that even then, there is variation not just from brand to brand but also within the same brand, perhaps depending on harvest or changing techniques. Anyway, I then adapted a recipe with a custard base, using coconut milk instead of the cream (I used the full can and reduced the milk to 1 cup, and used 1 cup of canned pumpkin purée). I liked the result much better, though it still froze into something too hard to scoop. It was also a bit blander than I would have liked; it was great with maple syrup (which tells you it wasn’t sweet enough!), and would make a great base to add the spices I mentioned above. So if I found coconut milk with a reliably higher fat content, I would try that again… 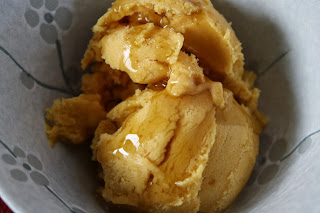 The recipe that I think is really worth it, though, is this muffin recipe from Averie Cooks, which my friend Jen shared. It is by far the best pumpkin recipe of the season! They’re not heavy muffins and almost feel like cupcakes. They are moist and absolutely delicious! I’ve made them twice: the first time, I was disappointed by their appearance, because the original blog post shows them with a pleasant orange-y color, but mine were brown. Delicious, but homely. 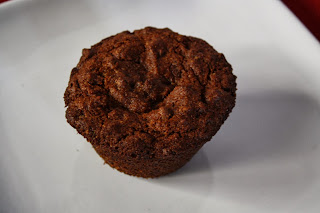 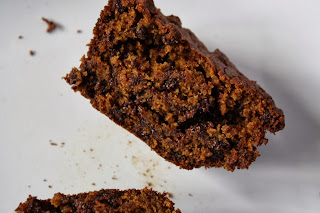 So I made them again, changing the recipe a bit and baking them at a lower temperature to get a lighter crumb, and that’s what I’m sharing here. I’m also giving you the amount of spices that I used, but of course those can be adjusted depending on what you like.

Preheat oven to 375 °F. Spray a muffin tin with floured cooking spray or grease and flour the pan; set aside.

In a large bowl, whisk together the flour, baking powder, cinnamon, ginger, allspice, nutmeg, cloves, and salt; set aside.

In a medium bowl, whisk together the sugars, pumpkin purée, coconut oil, milk, maple syrup, and vanilla until combined.

Pour the wet pumpkin mixture over the dry ingredients, and stir until just combined; don't overmix. Fold in the chocolate chips.

Divide the batter equally among the cavities of the prepared pan. Each cavity will be just under ¾ full. Bake for about 18 to 20 minutes, or until tops are domed and a toothpick inserted in the center comes out clean. Allow muffins to cool in pans for about 10 to 15 minutes before removing and placing on a rack to cool completely. 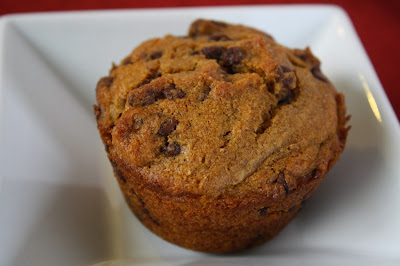 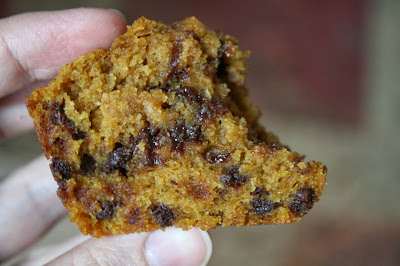