This post was a long time in the making. You already know I like flourless chocolate cakes – after all, I made some for my wedding. I’ve been playing around with a few more gluten-free variations, but not always with as much success. There was a grain-free chocolate cake made with coconut flour, which had a more traditional texture, albeit a dry crumb. I used 70% chocolate to make it, but found it wasn’t sweet enough, and even with a springform pan, it was hard to unmold. So all that to say that it was alright, but even with dietary restrictions, I felt I could do better. 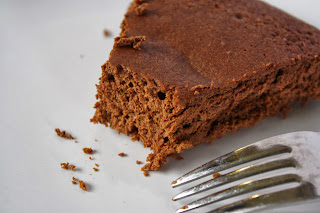 Then I saw this recipe on Bon Appétit for a decadent chocolate cake called La Bête Noire. It looked fabulous, but I can’t handle that much butter, and I felt like it wouldn’t be as good with vegan margarine. And let’s not even get started on ganache… Enter this recipe from Paleo Digest, which is essentially the same but with coconut oil instead of the butter! Even then, it took a while to get it right. See, the cake is meant to be cooked in a springform pan set in a water bath. However, on my first attempt, I had leaks galore and water got into the batter. It could be because my tin foil was too narrow and didn’t cover the base of the pan properly. Or it could be because of the brand of my pan, which I bought out of desperation (I won’t name it, but it’s a generally very well-regarded brand that I feel is way overrated, as their appliances are often flawed, and honestly I hadn’t realized that the pan was theirs until this fiasco). So anyway, I tried it again, this time with extra-wide tin foil that could cover the entire pan seamlessly. And wouldn’t you know it, I got leaks anyway. Maybe there was a small tear in the paper and I didn’t notice it? I know I was careful when pouring the boiling water into the baking pan so that there was no splashing… I used paper towels to dab the top of the cake and just baked it some more, and it was better than my first attempt, but still not something I would ever serve to guests.

Finally, the third time’s the charm. I tried once more and decided to make it in a regular pan set in a water bath, so that leaks would not be an issue. I lined the pan with tin foil and greased it, to make sure I could unmold the cake after it was baked. There was too much batter for my 9-inch round cake pans, so I used an 8-inch round one that has 2-inch sides; since this made the cake thicker, I baked it longer and that is reflected in the recipe below. I also omitted the water from the batter, as I don’t think it needs it. And this cake is one I can stand behind. If you’re into labels, it’s: flourless, grain-free, lactose-free, dairy-free, paleo, kosher for Passover. It’s dense and rich and delicious! It’s almost like cheesecake, but without any dairy.

Note that your maple syrup and eggs should be at room temperature, so that the chocolate mixture doesn’t seize up if you add them straight from the fridge.

18 oz. bittersweet chocolate (I used Ghirardelli; make sure you use quality chocolate, because it’s a lot!)
1 cup coconut oil
¾ cup maple syrup (I prefer dark syrup, like amber or medium or the grade-previously-known-as-B)
¼ tsp. salt
6 eggs

Preheat the oven at 275 °F. Line a tall 8- or 9-inch round pan with tin foil; grease and dust the foil with cocoa powder. Set the cake pan in a bigger baking pan.

Melt the chocolate and coconut oil in a double boiler. Let melt slowly and stir often to avoid burning the chocolate. Remove from heat when the chocolate is just fully melted. Beat in the maple syrup, water and salt. Beat in the eggs, one by one, until completely incorporated into the mixture. (You can use an electric whisk, but I did it by hand.)

Pour the cake batter into the pan. Add boiling water to the baking pan so that it reaches halfway up the sides of the cake pan. (I used hot water from the double boiler, but water poured from a kettle would be good too; just make sure it doesn’t splash onto the cake batter.)

Bake for at least 50 minutes (for the 8-inch pan, I baked it a whopping 90 minutes, but it would be less with a wider pan). The cake should be set, but still look a little shiny and wet in the middle when done.

Let cool at room temperature for about an hour, then refrigerate 5 hours before removing from the pan, peeling away the foil and serving. You can let it warm up a bit at room temperature, perhaps 15 minutes or so, beforehand. Cut with a clean, warm knife (run the knife under hot water between slices). 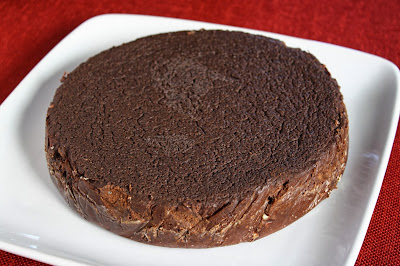 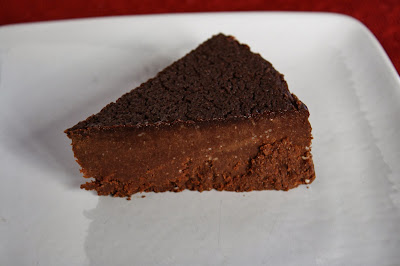 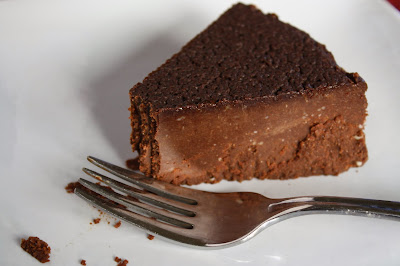