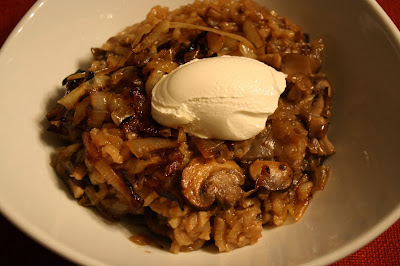 Here’s a great winter dish to warm you up. While it hasn’t been as cold in San Antonio as in the rest of North America, we did have some hard freezes, sleet and freezing rain, all of which are quite cold for these parts (and considering that people here don’t have snow tires or windshield scrappers, it’s pretty bad). So it’s winter here too, and this calls for winter food. As with other warming dishes like mujadara, it’s not pretty, but it’s very good. The recipe is from The Kitchn. It’s simple, as far as risottos go, because this one cooks in the oven! And caramelizing onions is relatively hands-off. While the dish was good on its own, it was really the addition of lactose-free sour cream that made it great for me. If you don’t have access to lactose-free sour cream, you could of course keep it vegan and use a vegan sour cream substitute, but I’d rather use lactose-free Greek yogurt to keep that tang, You could also top it with some chives or parsley for a little green color if you wish. This recipe serves 4 to 6.

Heat the oven to 300 °F. Rinse the dried mushrooms lightly, to remove any dust or grit. Place the mushrooms in a ceramic bowl and pour the boiling water over them. Set them aside to steep while you cook the onions.

Chop one of the onions into a fine dice. Heat 2 Tbsp. of the olive oil in a 3-quart (or larger) ovenproof pot or Dutch oven over medium heat. Add the onion and garlic and cook, stirring occasionally, for about 8 minutes, or until soft and golden. Push the onions to the side of the pot, and turn the heat up to medium-high. Add all the sliced cremini mushrooms and let them cook for 5 minutes without stirring. Flip the mushrooms and cook for another five minutes, or until they are quite brown and a crust is developing on the bottom of the pan.

Drain the dried mushrooms, reserving the liquid. Add the mushrooms and rosemary sprig to the pan and sauté briefly, mixing with the onion and the rest of the mushrooms. Add the rice and cook, stirring once or twice, for about 4 minutes, or until the rice begins to turn transparent.

Turn the heat to high and add the white wine, vinegar, broth, and reserved mushroom steeping liquid. Stir and scrape the bottom of the pan as you add the liquid to deglaze any yummy mushroomy bits sticking to the pan. Stir in the salt and pepper. Bring to a boil. Cover the pan with a tight-fitting lid and put it in the oven to bake for 35 minutes.

While the rice is baking, make the caramelized onions. Heat the remaining olive oil in a cast iron skillet. Cut the remaining three onions in half, and then slice them into thin half-moons. Add them to the oil and sprinkle liberally with salt. Cook on low heat, stirring occasionally, until the onions turn a dark mahogany brown. Let them go as long as you can; it’ll probably take 30 minutes, perhaps a bit more.

When the risotto has finished baking, let it stand uncovered for 5 minutes before serving. Dish it up and top each bowl with a spoonful of caramelized onions, a little extra pepper, and, if desired, a scoop of lactose-free sour cream (see above). 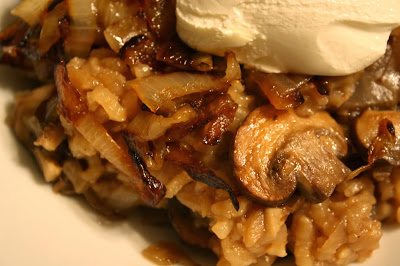