I actually got around to making the granola recipe that Jen suggested in the comments a month ago, which means that I officially made every pumpkin recipe I collected over the fall and then some. So I’m actually making progress in my pile of recipes to try, instead of just treading water. Yay! It turns out that this granola is really good, too, so I’m glad I made it. I changed the spices a bit, basically because I don’t keep pumpkin pie spice on hand, so I’m giving you my version below (the original is on Two Peas & Their Pod).

Preheat the oven to 325 °F. Line a large baking sheet with parchment paper and set aside.

In a medium bowl, whisk together brown sugar, pumpkin purée, applesauce, maple syrup and vanilla extract. Whisk until smooth. Pour wet ingredients into oat mixture and stir until the oats are evenly coated. They will be moist. Evenly spread the mixture onto the prepared baking sheet.

Bake for 20 minutes. Remove pan from the oven and stir. Bake for an additional 15-20 minutes or until the granola is golden and crisp. (Note that the granola will finish crisping up as it cools. I left mine a total of 60 minutes in the oven, and while it didn’t burn, it ended up being too crisp for my taste; 40 to 50 minutes would be plenty.) Remove from the oven and stir in dried cranberries and pepitas. Let cool completely. Store in an airtight container. 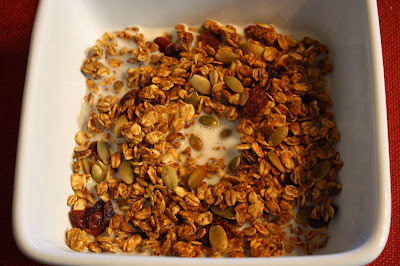 I don't buy pumpkin pie spice, I make my own! Pretty sure I pinned it somewhere. The recipe uses spices you most likely already have.

Well, I tend to make my own on the spot, because I have the spices called for. I usually don't keep it on hand because a) lack of space, and b) I adapt recipes that already call for a lot of cinnamon, for example, and it would be too much for my taste if I also had pre-made pumpkin pie spice mix...