Pasta with Yogurt and Peas 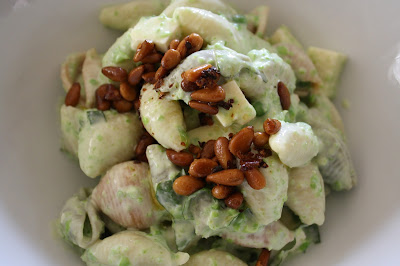 I found this recipe on Orangette, where Molly Wizenberg adapted it slightly from Jerusalem (a cookbook about which I’ve heard a lot of good things). This pasta dish seemed right up my alley, what with the Greek yogurt and peas and garlic folded in. It also has a spicy sauce (well, oil and chile flakes and pine nuts) that I thought the Engineer would like. I felt so confident about it that I decided to follow the recipe as it was, without reducing the amount of chile pepper like I normally do, and I only put a little bit on my pasta (mostly pine nuts), while I gave more to the Engineer. Yowza! That was way too spicy for me (though it should be noted that it did not bring on labor), and he didn’t like how oily it was. So we actually chucked the sauce and, on the second night, I topped the dish with plain toasted pine nuts and that was much better for us. Obviously you are free to use the spicy sauce and adjust it to your liking, but we’re going to stick to just the pasta. On the bright side, I really liked this dish! The recipe makes about 6 servings.

In the bowl of a food processor, combine the yogurt, 6 Tbsp. the olive oil, the garlic, and 2/3 cup (100 g) of the peas. Process to a uniform pale green sauce, and transfer to a large mixing bowl. (So, I’m operating with pregnancy brain again and accidently put in 2/3 of the peas, not 2/3 cup of the peas. The bright side is that more of them were incorporated into the sauce, making it easier to trick certain people into eating their peas, but I did add a bit of pasta water to help with the consistency.)

Meanwhile, bring a large pot of water to a boil, and salt it until tastes like pleasantly salty seawater. Add the pasta, and cook until it is al dente.

If you are making the sauce: while the pasta cooks, warm the remaining olive oil in a small frying pan over medium heat. Add the pine nuts and chile flakes, and cook for 4 minutes, or until the pine nuts are golden and the oil is deep red. You can also opt to toast some pine nuts in a pan, plain, or omit those entirely.

Also, warm the remaining peas in some boiling water (you could scoop out a bit of the pasta water for this), then drain.

Drain the cooked pasta into a colander, and shake it well to get rid of excess water that may have settled into the pasta’s crevices. Add the pasta gradually to the yogurt sauce; adding it all at once may cause the yogurt to separate. Add the warm peas, the basil, feta, and 1 tsp. kosher salt (if desired). Toss gently. Serve immediately, with pine nuts and chile oil spooned over each serving if desired. 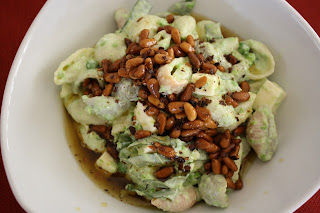 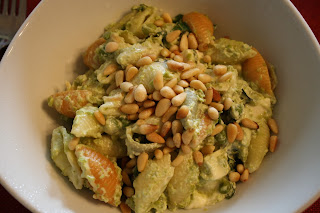