Nate Berkus, this is your legacy

I’ve mentioned Nate Berkus on this blog before. I loved him on Oprah, I loved his show, I love his books – Home Rules and The Things That Matter – and I love his stuff at Target. (You can read more about him here and about the latest book here.) And you know, after watching makeovers on his show for a while, I became obsessed with the idea of buying second-hand furniture and refinishing it. (If you don’t know what I mean, please see 10 ways to transform a dresser, which has great examples.) I held off for a certain time, as I didn’t have anywhere to put new furniture, but then late last summer we decided to get started on the nursery. This was before I was pregnant, but our reasoning was as follows: pregnant women can’t carry heavy furniture up a set of stairs and they aren’t supposed to be dealing with paint and primer and products that could give off fumes anyway, so it only made sense that I would do this before conceiving. Plus, we’d been trying for so long that it was getting depressing looking at that empty room. (Also, I’m a planner and did not want to leave it all for the last few months of pregnancy.) I realize that some of you will say that it’s bad luck to plan a nursery before one is well into the second trimester, but here’s my rebuttal: a) planning for a baby’s arrival before conception does not reduce my odds of getting pregnant or of having a live birth; b) I thought about it, and if I had gotten pregnant and had subsequently miscarried, it would not have made me any less sad to think, “Oh well, thank heavens at least I didn’t have the nursery ready.” So we started early.

First things first: I visited second-hand furniture stores (we bought a $36 bookcase at Hats Furniture Haus in New Braunfels, but the Salvation Army had nice stuff, too). I went to yard sales, for which I recommend the Yard Sale Treasure Map: enter your address at the end of the week, and it will tell you about the yard sales near you that weekend (keep in mind that the best pieces tend to go early Saturday morning). And I lurked on Craigslist, where I eventually found a dresser which we got for $60 (down from $100). Architectural salvage yards are also a good option if you are lucky enough to have some near you.

Before any painting, here’s some real-life advice, so that my experience can benefit others. Once we got the dresser home, I noticed an unpleasant smell coming from the top drawer: the previous owner had spilled perfume in it, and the smell was really strong (but none of the other drawers were affected). I looked up how to get rid of smells in wood dressers and found links like this and that (though many tips were for getting a moldy smell out, which involves killing the mold, but that really wasn’t the issue here). I also solicited advice from friends on That Social Network. I started by scraping off the varnish where the perfume had been spilled, I let the drawer air out in the sun, I scrubbed with baking soda, with vinegar, with OxiClean, then left a bowl of vinegar in the drawer for several days. I tried wetting the wood and spreading salt on it to absorb the water and the smell, with no luck. I tried ammonia, diluted and straight, plus tea tree oil and eucalyptus oil, and finally, Febreeze. For the record: vinegar, ammonia, eucalyptus oil and Febreeze all seemed very promising at first, but as soon as their own smell dissipated, the smell of perfume came back. In the end, the Engineer used several coats of Varathane polyurethane sealant in the drawer, which worked perfectly. (Once I was done with all that, someone swore by Nilodor, which I will try next time, but at this point my best recommendation to you is still the sealant.) 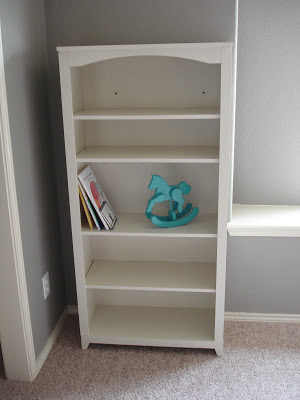 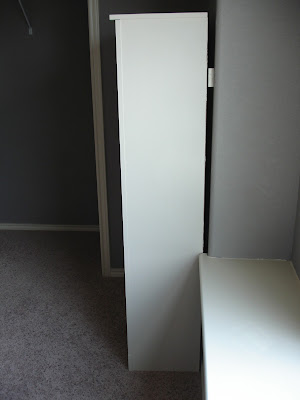 I’d never painted a piece of finished wood furniture before, so I looked up various tutorials online. I really recommend the ones on Centsational Girl, such as How To Paint Furniture, The Boy’s Dresser, and Painting A Kitchen Table. There’s also a good tutorial on Make It & Love It, plus tips on The Cerniks, and as a bonus, how to remove paint from hardware without nasty chemicals. In a nutshell, what you need to do is sand, prime, paint (adding Floetrol to the paint, which makes it more liquid to minimize the appearance of brush strokes and paint drops), and polish (if the piece will be high traffic, like a table top, but I didn’t bother for these two pieces). Those links I gave you are to paint a piece of furniture; if you are interested in refinishing the wood instead, try this tutorial from The Brick House; if you want to stain it, here’s a tutorial from Frugal With A Flourish. I also bought new handles for the dresser ($11.84 in all), because I really didn’t like the original ones, then I put on my big girl pants and, for the second time in my life, used a power drill for the precision work of drilling the new holes (plus wood putty to fill the old ones, before sanding the piece). I love the result! I also used cute wrapping paper to line the drawers ($3.99 for one roll, which was sufficient); it’s a small detail that really makes a big difference. 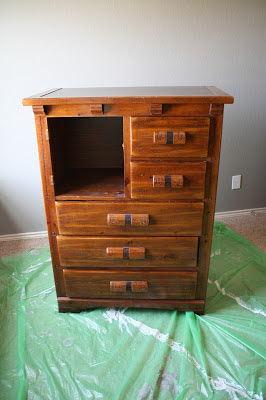 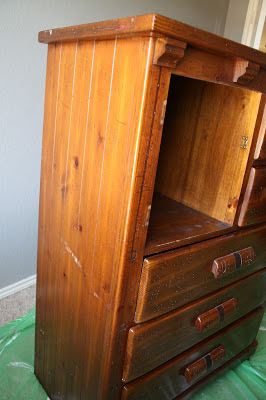 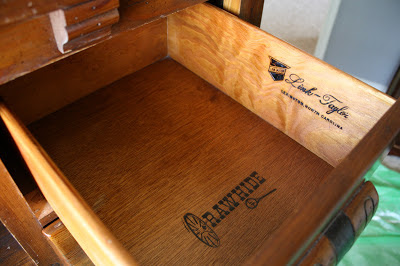 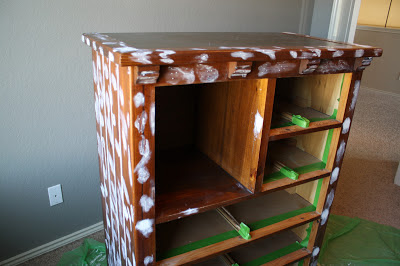 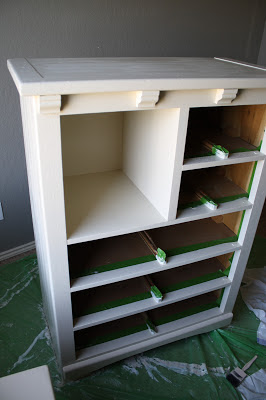 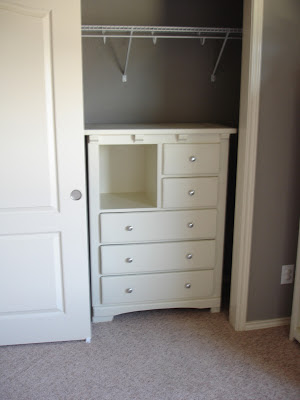 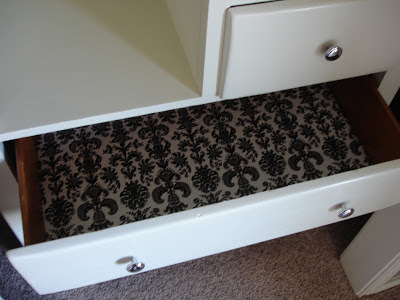 So the end result is a nice-looking dresser, which fits right in the closet and matches the trim and closet doors. The truth is that I’m much happier with it than with anything I could have bought ready-made in a store. I also used the same technique to refinish the bookcase, then we nailed it to the wall so it wouldn’t tip over. In the end, I’m incredibly happy with the look of things and the fact that both pieces were very budget-friendly, so I’d like to thank Nate Berkus for the inspiration!