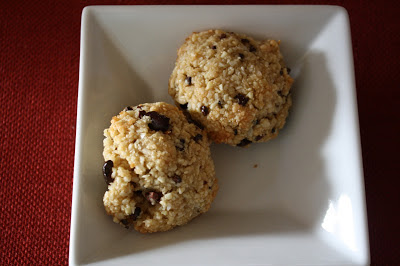 I got this recipe from The Sprouted Kitchen cookbook. It happens to be gluten-free, and a recipe note says it can be made vegan by using 1 Tbsp. ground flaxseed + 3 Tbsp. water instead of the egg (you’d be giving up a bit of the leavening power, but this mixture would act as a binder). It was while reading this note that I noticed it mentioned not to use a silicone mat, because it would prevent the bottom of the cookies from getting crispy and they might fall apart. I must say that I did not encounter this problem, at least not after the cookies had cooled down, but I should still advise you to use just a baking sheet (perhaps you could still line it with parchment paper, just in case the cookies stick). The Engineer and I both liked these cookies; they tasted a little like macaroons, and since the recipe calls for cacao nibs instead of chocolate, they’re really not that sweet (although you could probably use mini chocolate chips instead if you wanted).

In another bowl, beat the egg very well until it is a uniform color and doubles in volume. Whisk in the coconut oil and vanilla extract. Add the wet mixture to the dry ingredients and mix until just combined. Refrigerate bowl for at least 30 minutes and up to overnight.

Preheat the oven to 375 °F. Using your hands, roll the chilled dough into balls no larger than 1 inch in diameter. Place on baking sheet with 1 ½ inches between them, and give them a gentle press with the palm of your hand to flatten them slightly. Bake until edges just begin to brown, about 7-10 minutes. Remove from the oven and let cool before serving. 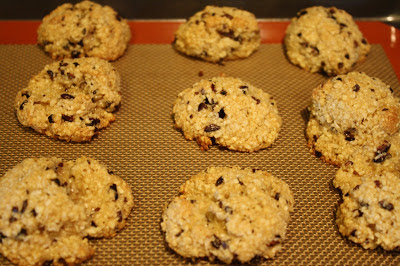 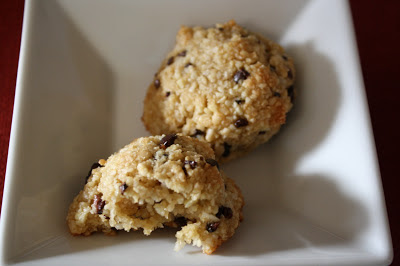