Here’s a great summer salad I want to share. The main ingredients are carrots and edamame, with some avocado thrown in, and the dressing has ginger, citrus and honey. The carrot quantities below make about 2 servings if you’re having it as a main course, splitting one avocado between two people; you can of course serve it as a side or increase the quantities. I really loved the salad and thought it was exactly what I wanted; the Engineer, on the other hand, felt that the carrots combined with the edamame were too bitter and the honey and orange juice in the dressing weren’t enough to compensate (I should note here that I found neither the carrots nor the edamame bitter). But hey, guess whose blog this is? So here’s an awesome salad recipe.

Combine the carrot matchsticks, thawed edamame, sesame seeds and chopped cilantro in a large bowl. Season the whole mixture with salt and pepper and toss lightly with your hands. Set aside.

In a small-medium bowl, combine the orange juice, lime juice, salt and pepper, agave nectar, ginger and sesame oil. Whisk it all together until incorporated. While whisking with one hand, slowly drizzle in the grapeseed oil until you have a homogenous and unified dressing. (I always do this in a jar and just shake it, it’s so much easier!)

Pour the dressing over the carrot and edamame mixture. Toss to combine. Top with the chopped avocado pieces. Garnish the dish with more sesame seeds and cilantro if you like. 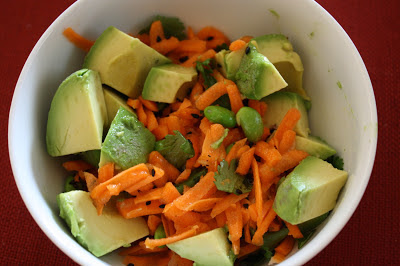