Alright, so here’s a round-up of what I’ve been knitting lately. I’ve been doing my best to knit from my stash, so to speak, using up yarn that I already had, but I couldn’t resist a few more purchases last month (one of which is for Baby’s Christmas outfit, so hopefully I’ll have time to make it in the fall).

First, I made this sunnyside baby cardigan, a free pattern by Tanis Fiber Arts. The yarn had been in my stash for only a little while, and it was Sublime Baby Cashmere Merino Silk DK in color 337. This cardigan was my first foray into cables – I don’t know why I waited so long, because cables look fantastic and they’re really not hard! It’s knit in one piece from the top down, and I think those have become my favorite kind of pattern. I got the buttons at Hobby Lobby a while back and those were in my stash, too. 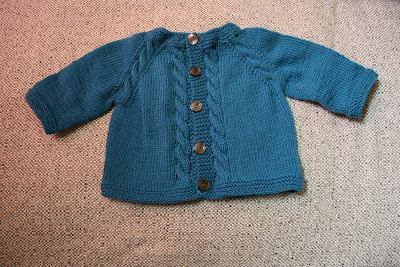 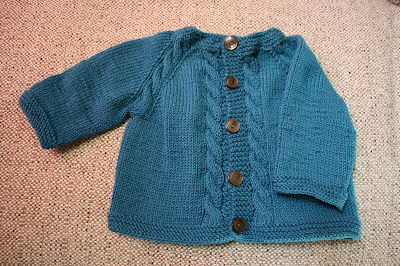 I then made a seamless kimono found on Ravelry. I made it with a waist band in contrasting pattern, though I kept using the same color; I could also have kept the whole thing in stockinette stitch like this, but it would have looked a bit plain with my solid-colored yarn – a variegated one would have worked better. My yarn was Debbie Bliss Rialto Lace in color Sky, though I used two strands of it for this kimono. (Actually, always using it two strands thick, I got a total of 4 baby sweaters from 4 skeins. And it’s so, so soft!) 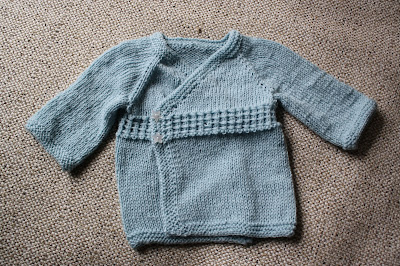 I also made another puerperium cardigan in green, with star-shaped buttons this time, for a neighbor, who is having a little girl next month; plus another cardigan from Sirdar’s Early Arrivals 3, again with Debbie Bliss Rialto Lace in color Sky and star-shaped buttons (this one for us). 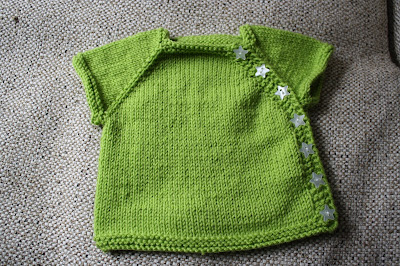 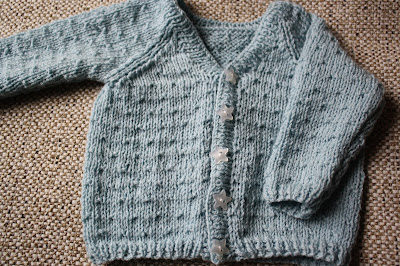 At that point, I had only a little of the green yarn left one the penultimate skein and even less of the bossa nova left at all, so I used them to make two pairs of booties. The green ones sorta remind me of Shrek feet… The multicolor ones are in a smaller size, and I fudged it at the end because I didn’t even have enough yarn to do the soles properly – it’s not like the baby will be walking in these anyway, though, and after washing and blocking, they look just fine. 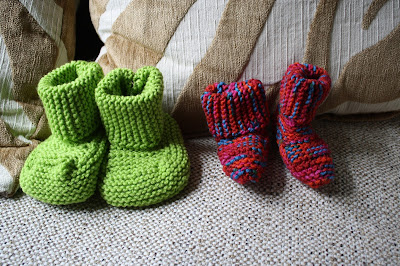 After that, I went way back into my stash for something I’d put off for a long time: a sweater pattern by Phildar that I found at Mouliné in Montreal. The sweater had been knit as a demonstration product and I just fell in love with it, so the store owner gave me a photocopy of the pattern, as she said it was out of print (though the link I gave you is from Ravelry, so there might still be a way to get your hands on it). I bought Cascade 220 Heathers Yarn in color 2444 to make it – I bought the yarn at Mouliné, but the link above is to Jimmy Beans Wool, in case anyone is interested. In person, this yarn is much less pink than on the image at the link; it’s more of a coral color that I felt looked quite autumnal, though perhaps a little more orange would make it more unisex. The colors on my photo are accurate. I used 1.5 out of my 3 skeins for this, so I still had enough for another project (see last cardigan below). 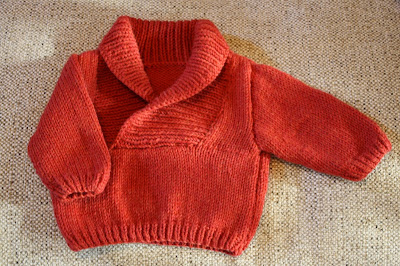 This next cardigan is feminine, with leaf patterns for the buttonhole band, but I figured it was appropriate for my yarn, since it had a sparkly thread in it and that, to me, isn’t great on boys. It’s Cascade, by Petite Purls, and the yarn was Berroco Bonsai Yarn in Akane Red, which is 97% bamboo cellulose and 3% sparkly nylon. It’s a ribbon yarn, which may not have been the perfect structure for the cardigan. I used wooden buttons from my stash. Overall, while the pattern wasn’t really complicated, I’m not crazy about the result. Well, at least the bamboo is breathable, so I’ll probably get some mileage out of it – assuming I have a girl at some point. 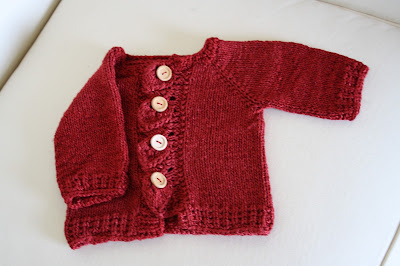 I followed this up with the Provence Baby Cardigan by Classic Elite Yarns (note that the link is full of spam, but does contain the free pattern), again with the green yarn that won’t quit and wooden buttons from my stash. This was knit in pieces (front left, front right, back and two sleeves), and while this is how I used to make all my baby cardigans a few years ago, it now feels surprisingly amateurish because of all the seams you have to create afterwards! It is cute, though. 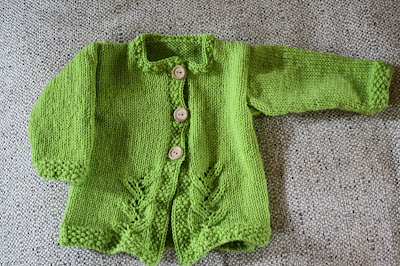 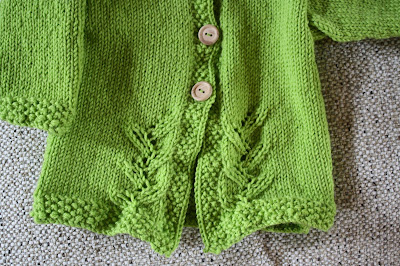 I then made what might be my new favorite pattern with the last of the blue merino yarn: a garter yoke baby cardigan. This one is knit in one piece from the top down, and it’s pretty fast work, too. I paired it up with this hat, but I knit the edge in garter stitch instead of ribbing, so that it would match the sweater. I hope I get around to making another one! As it is, this one is for dear friends of ours who are expecting a baby boy this fall – I didn’t get around to mailing it yet, so I guess they’ll see it here before they receive it, but it’s the thought that counts, right? 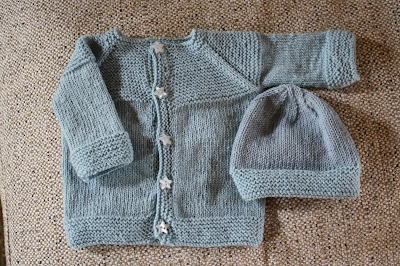 I got around to making a cardigan based on this image. It’s adapted from an existing pattern on Ravelry, but I decided that I could make something similar without buying the pattern, and I was right! I used the softest grey yarn in sport weight, Blue Sky Alpacas, and combined three patterns I already had: the Little Pearl Vest for the shoulders, the Pebble Yoke Cardigan for the body (sleeves and button band), and the V-neck Baby Vest for the line pattern on the body. The yarn I used probably wasn’t the best choice, though, as it is a bit fluffy (and shedding), so it doesn’t show the line pattern very well. It is so soft, though, that I really don’t care! 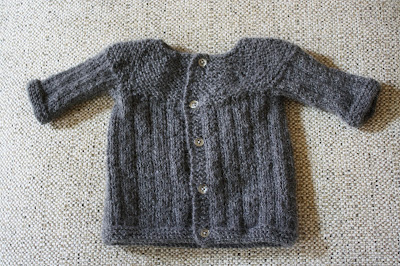 Finally, I made a cardigan based on this beauty. I emailed both the recipient of the cardigan (well, her mother) and the knitter, but neither one had a pattern – it turns out the knitter just improvised it based on a photo and knit it in three days. I’m not that good, but I wasn’t going to give up, especially given that I had the exact same yarn (1.5 skeins of leftover Cascade 220) along with exactly 2 matching buttons from my stash. So I decided to use a cardigan pattern as a base (though I only used it for the first 6 rows of the collar, really) along with a leaf pattern found online. I adapted the knitting to stick as closely to the picture of the original leaf cardigan as I could: 11 leaves spread around the yoke, on a garter-stitch cardigan. For the record, it took me much longer than 3 days: I knit several versions of the leaf to get it to the right scale, then calculated how to space them out evenly on the yoke, did a lot of math on paper, and spent several days literally knitting a few rows and ripping them up because I thought of a modification. The basic idea, if anyone wants to try it, is that when you are increasing the number of stitches on the leaf (in the top half), you need to decrease the number of garter stitches that separate each leaf; then when you decrease the number of stitches in the leaf (in the bottom half, where it tapers off to a point), you increase the number of garter stitches in between the leaves accordingly. I’d also put the second buttonhole higher next time, if I make another one. Overall, though, I’m really happy with it, as it’s by far the most complex thing I’ve ever made without a pattern! 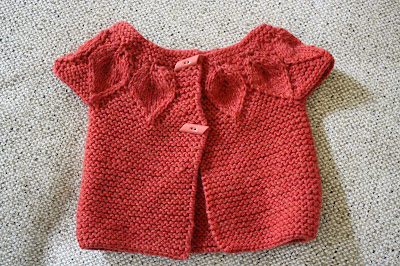 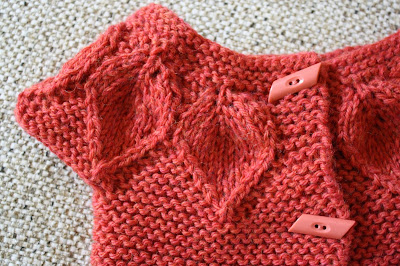 I’m now knitting another kimono, in varied shades of blue, and I’m pretty sure I’ll still be knitting it when the baby comes, but it’s a simple pattern in garter stitch, so I might be able to finish it even with my brain turned to mush from hormones and lack of sleep. And then I’ll get started on the Christmas outfit, part of which will be substantially more complicated.
Posted by Amélie at 2:52 PM