Egg and Spinach Tarts, with Bacon and Cheese 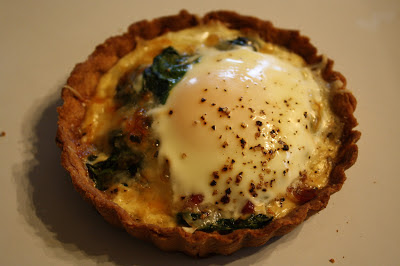 While this recipe was originally meant as a brunch dish, we decided it was good for dinner, too. My tart pans are 5” wide, not 3” as in the original recipe, but after rerolling the dough to get more out of it, I did get 6 tarts, though I added cheese to the filling. I changed the recipe a little to make it lactose-free and easier (like cooking the spinach in leftover bacon fat instead of putting olive oil in another pan). In our case, one tart with a side salad would be a light dinner, but 2 tarts per person is also a reasonable serving. I knew this was the type of thing the Engineer would like, and he did indeed make his happy face, which I hadn’t gotten in a while, so I’m very happy about that.

You know how to make pie dough, right? Just mix the dry ingredients in the food processor, then add the butter (and in this case, the egg yolk) and process until the mixture resembles coarse sand, then add the water and process until the dough holds together. The dough should then be refrigerated before you roll it out. Cut out circles to fit you tart pans (my pans were 5” in diameter, so 6” circles did the trick).

To prebake the dough, prick it with a fork, put pie weights on it if you have them, and place on a low rack in a 350 °F-oven for 15 minutes (the original recipe said 400 °F, but I found the tarts got too dark, although that does depend on how thick your dough is). At this point, I recommend unmolding the dough, because it got harder to do it once the tarts were filled and cooked; just place the crusts on a foil-lined baking sheet. Leave the oven on at 350 °F.

Cook the bacon in a pan until it is crisp; once cool enough to handle, crumble it. Using the same pan, cook the spinach in the bacon fat until it is wilted.

In a small bowl, whisk together 1 egg with the lactose-free milk.

In each tart pan, put some bacon, spinach, and cheese. Top with the milk mixture. Make a small nest in the middle of each of the tarts (I found this easier) and crack an egg over each tart. Season with salt and pepper. Bake the egg tarts for 20 to 30 minutes (I cooked mine for 20 minutes in the center of the oven, then 5 minutes on the very top rack), until tart shell is golden brown and the eggs are almost set or set, depending on your preference (the Engineer liked that ours were just set). Let cool for 10 minutes on wire rack before serving. 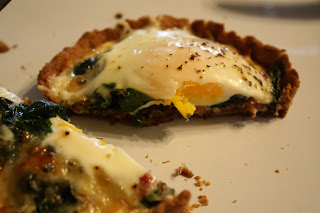